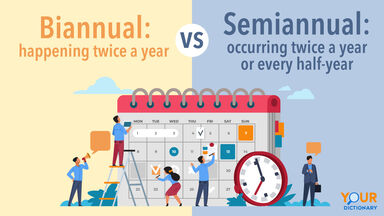 Are Biannual and Semiannual Synonymous or Separate?

Biannual and semiannual are often used synonymously, meaning the same definition is applied to both. Both are adjectives that describe some event or practice.

How to Use Biannual

The Latin prefix bi- means “two” or “twice.” Annual comes from a Medieval Latin term annualis meaning “yearly,” which itself is derived from the Latin annalis or “year.” Therefore, biannual means “twice each year.”

When and How to Use Semiannual

Semi means “half,” so in the context of semiannual it literally means “half year” or every six months.

Remember the Difference Between Biannual and Semiannual

At the end of the day, biannual and semiannual can be used interchangeably. However, remembering that biannual technically means "twice a year" and semiannual means "every half year" is a small but pivotal detail when you are deciding which word to use.

What Does Biennial Mean?

Biannual can sometimes be confused with biennial, which means “happening every other year” or “every two years.”

What Do Biweekly and Semiweekly Mean?

Since semi- means “half,” semiweekly indicates that something is every half week or twice a week.

Explore similar terms that are often used synonymously but have subtly different meanings, such as transparent, translucent and opaque. Then check out words that look similar and have the same meaning but are used slightly differently, like preventive and preventative.