Blond vs. Blonde: Simplifying the Difference

Do you have blond hair or blonde hair? Blond and blonde mean the same thing — a person with light-colored hair. However, the difference in spelling often comes down to gender or location. Explore the history of the words blond and blonde and how to use them in context. 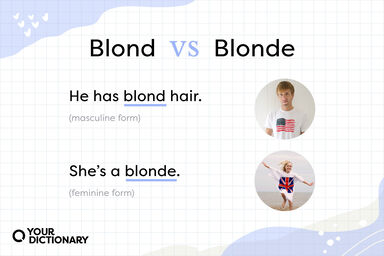 The Reason for the Spelling Difference

Blond or blonde literally means “light-colored” and is typically used in reference to a person’s hair color. The shades of blond(e) vary, and so do the spellings. The word is derived from French, which is a grammatically gendered language, meaning nouns are either masculine or feminine. It gets more complicated when you use blond and blonde as adjectives.

History and Etymology of Blond and Blonde

The first documented use of the word blond in English was in 1481. The word is derived from the Old French blunt or blont which means “a color between golden and chestnut.” Before that, people with this hair color were described as “fair.” As previously stated, French uses gendered nouns, and English also used gendered nouns until the 1200s.

The Correct Spelling According to Style Guides

The AP Stylebook states that blond is favored in American English and blonde is more common in British English. Additionally, it affirms that you should use:

However, there has been some dispute about the use of blond and blonde as gendered nouns. The American Heritage Book of English Usage concluded that using blonde solely for women was linked to sexist stereotypes.

How to Use Blond and Blonde

Generally, blond is the spelling applied to men, but it can also be a neutral term used for everyone.

In contrast, blonde is typically used for women.

However, both blond and blonde can also be used as a default spelling for everyone.

Describing More Than One Person

What about when you are talking about more than one person? If you go by French standards, two golden-haired women are blondes, but two men are referred to as blonds. If you have multiple people of different genders, blonds is the go-to plural. However, as with the singular forms, this varies depending on British vs. American English and which style guidelines you adhere to. Ultimately, when in doubt, blond is usually your best bet.

Spelling can be confusing, especially when the words are derived from another language. Explore words of French origin that are commonly confused, such as fiancé and fiancée or catalog and catalogue.