Born vs. Borne: Easy Guide to the Differences 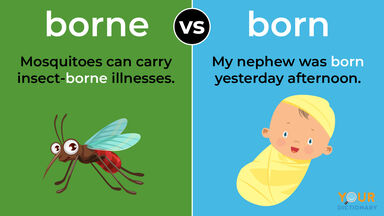 The difference between born and borne isn't as tricky as it seems. Born is the correct term for a baby who was just born, while borne is a word that means "carried."

You're probably more familiar with the word born, which means "brought into the world from birth." It's a past participle of the verb "to bear" when specifically describing a woman bearing a child.

Explore examples of how to correctly use born in a sentence:

Born as an Adjective

Borne is a past participle of the verb "to bear," meaning "to carry" or "to transmit." Borne can also mean "to endure."

When Does Borne Describe Giving Birth?

In some cases, borne has a birth connotation, but only when describing the mother. It has a past perfect use that describes the mother carrying the child as well as giving birth. Some examples of using borne in a sentence include:

The biggest cause for confusion when using borne vs. born are the colloquial phrases "born out of" and "borne out." Just like born and borne, they are almost the same — but not quite.

The easiest way to remember the difference between borne and born is by remembering the word childbirth. Do you see an "e?" There isn't one — just like there's no "e" in born, which is the word you use when describing childbirth.

Another way to remember the difference is to think of the word borne carrying the letter "e," just like an insect would carry an insect-borne illness. That should help you remember that borne means "to carry!"

Borne and born are homophones, which means that they sound the same but are spelled differently and have different definitions. Homophones are great poetic devices, but they can be confusing when you're trying to choose the correct word. Clear up more homophone misunderstandings with these tips on telling the difference between cite vs. site vs. sight.