Brava vs. Bravo: Give Your Compliments Correctly

You are at the theater, admiring the spectacle, the drama and the talent on display. To share your appreciation, you exclaim bravo! However, you hear another person shout brava! But which, if either, is correct? Explore the possibilities of brava, bravo and other variations of this expression, including when and how to use them. 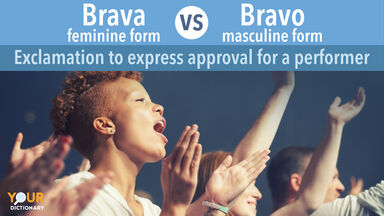 Brava or Bravo: The Difference Defined

Although they are spelled and gendered differently, brava and bravo have the same meaning and are used in the same context. The expressions bravo and brava are used to show appreciation for someone or something, particularly in cases where an audience cheers or applauds a singer, actor, speaker, or even athlete. However, bravo is commonly accepted as the standard for everyone, so in American English, other forms like brava are a fun bonus for a night at the opera.

Brava and bravo are Italian expressions. The terms were adopted in Spanish, French and English and can be heard all over the world. The difference is due to grammatical gender, which classifies words into masculine, feminine or neuter categories and words form an agreement with other parts of speech. Words ending in “a” are feminine while words ending in “o” are masculine.

When and How to Use Bravo

The literal meaning of bravo is “brave, good or clever.” It is derived from the Latin barbarous which means "foreign" or "barbarian." Not exactly what you want to call a singer whose work you enjoy!

Bravo is typically used in theatrical performances to show admiration for a singer or actor. Since bravo is the masculine form, it is typically used for men while brava is reserved for women. A more outdated meaning of bravo that can be found in older literature refers to an assassin or mercenary for hire. Finally, English uses bravo in the ICAO phonetic alphabet to indicate the letter “b.”

When to Use Brava

Like bravo, brava is an adjective used for applause and to show appreciation. However, brava is reserved specifically for women. Brava can also simply mean “good.” While bravo is the most popular form that is widely used for everyone regardless of gender outside of Italy, it is an alternate option if you want to showcase some grammatically correct Italian at the theater.

Bravi is the plural form of bravo and brava. It serves the same function and has the same meaning, except you would use bravi for a group of two or more men or people in general. For example, during the bows at the end of a theatrical production, bravi can be used for the entire company. It can also simply mean “good.” Historically, bravi also referred to hired assassins employed by the dons of northern Italy in the 16th and 17th centuries.

Other variations of brava, bravo and bravi are bravissima, bravissimo and bravissimi. Like the former, they use grammatical gender at the end of the words. These are considered superlatives that mean “great” or “greatest.” So, it is essentially the same thing as brava, bravo and bravi but stronger. If you want to show extra appreciation, use one of these expressions next time you go to the theater.

Using foreign words in your vocabulary and getting used to grammatical gender can be an adjustment. Whether you are learning a Romance language like Italian, Spanish or French or you are a music or theater buff who wants to enrich your vocabulary, explore some English words of Italian origin. Then, read up on similar commonly English confused words like peek, peak and pique.