The words break and brake are homophones, so they are pronounced the same way (brāk). While both words can function as a noun or a verb, they do not mean the same thing. Avoid miscommunication by learning when to use break vs. brake in your writing. 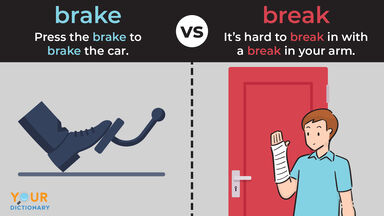 When to Use Brake or Break

When you're trying to decide between brake and break, ask yourself if you're talking about stopping or slowing down a piece of equipment, such as a vehicle.

Move Forward With a Memory Tip

The key to remembering whether to use brake or break has to do with their past tense forms. Which of these sentences makes sense?

The first sentence is correct; the past tense version of brake is braked. If you use broke instead, it sounds like you fell apart at the stop sign!

Brake Is for Vehicles

Cars, bicycles and other vehicles have brakes that help them stop. While brake always refers to vehicle use, there are two ways to use it: as a noun and as a verb.

Using Brake as a Noun

Break as a noun refers to a device that stops or slows the movement of a vehicle. For example:

Using Brake as a Verb

Brake as a verb refers to the act of causing a piece of equipment to stop by using a brake (noun). For example:

The word break has many different meanings, most of which involve separating into pieces. Unlike brake, you'll only use break in a sentence about a vehicle if something is broken or not working. Both the noun and verb forms of break have several important meanings.

Using Break as a Noun

When you use break as a noun, you're typically describing an interruption of some kind. For example:

Using Break as a Verb

The irregular verb break has many common meanings in the English language. They include:

Use these practice questions to test yourself or to create a break vs. brake worksheet if you're working with students. The answers are below, so don't peek ahead. Choose which word fits each sentence, then check to see how you did.

Check Your Break vs. Brake Skills

Now that you've tested your new knowledge with the practice items, take a look at the correctly completed sentences below to see how you did.

Review commonly confused words for clarification so you'll be ready the next time you have to choose. Reinforce your new knowledge with printable worksheets focused on often-confused terms. Then explore other confusing word pairs like stationary vs. stationery. You'll be prepared and ready for the next language conundrum that comes your way!