Breech vs. Breach: Which One Is Related to Pregnancy?

Babies and whales can be breech, but only whales can breach. Unless the baby grows up and violates a contract, in which case they can breach or be in breach. It all sounds complicated, until you realize that the breech vs. breach debate all starts with pants. (That makes it sound more complicated, but it’s really not.) 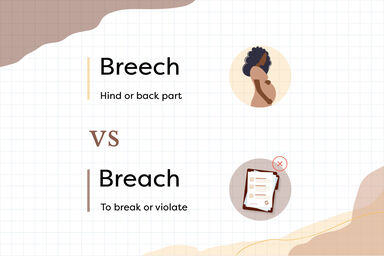 When describing a pregnancy where the baby is upside down (buttocks first), you say breech presentation (or “The baby is breech”). The term applies to all mammals who give live birth to their young, including humans.

Breech, which means “hind,” can also refer to the back part of a weapon, specifically a rifle or a cannon. The term breechloader refers to artillery that you load from the rear. Basically, any time you hear the word breech, think “back” (or “butt,” if you’d rather). It always refers to an actual location.

How to Use Breech in Writing

Medical professionals use the noun breech as an adjective to describe a pregnancy in which the baby is in the breech position. For example:

You can also use breech as a noun when talking about weaponry:

How to Use Breach in Writing

Breach commonly refers to the violation of a legal agreement. It can be a noun (to be in breach) or an adjective (to breach a promise). For example:

However, you’ll also see breach as a verb when talking about the natural world, particularly marine animals who come up from the water to breathe air.

Homophones With a Split Origin

So why do these homophones sound so similar when they have such different meanings? It all starts with pants. Back in the 14th century, the word breach (Old English brecan) often referred to the “break” in a person’s pair of pants — which soon became known as breeches or britches (Old English brēc). Breech became synonymous with the lower half of a person’s body, and by the 17th century, the term was used to describe babies who presented with their lower half first.

Broach is another word that often gets mixed up in the breech vs. breach tangle. But even though it sounds similar and has a similar meaning (“to poke a hole through”), it’s not related. It comes from the Old French broche (“a pointed instrument”) and brochier (“to stab”).

Today, broach has more of a figurative meaning (“to introduce in conversation”), but it’s not synonymous with breech or even breach. For example, if you said “I broached the agreement,” you’re saying that you brought up an agreement for discussion. But “I breached the agreement” means that you violated the agreement.

What a Difference an ‘A’ Makes

Breech and breach aren’t the only word pair that change meaning when you change one letter. For more vocabulary review, check out: