Bug vs. Insect: Why One Is Not Like the Other

The word bug is applied broadly to describe any small creature belonging to the Insecta class and is often used interchangeably with insect. However, this is not necessarily correct. All bugs are insects, but not the other way around. Sound confusing? Explore the terms bug and insect, when and how to use them, and how to tell the difference. 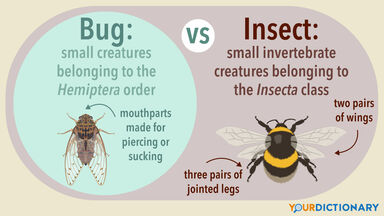 The Difference Between Bugs and Insects

Bug is often used more casually while insect is seen in more academic contexts. However, that is not the extent of the difference between these critters. Insects are classified into classes and orders. All insects and bugs fall under the Insecta class. However, bugs are part of the Hemiptera order.

How to Use Bug Correctly

Bugs are a type of insect that belong to an order of insects called Hemiptera. They have mouthparts that can pierce or suck, long antennae, forewings that are thicker at the base and translucent at the top, and a chitinous exoskeleton.

Examples of bugs include bed bugs, stink bugs, cicadas, and many more. Funnily, not all creatures with “bug” in their name are actually qualified as bugs, including ladybugs.

Other Meanings of Bug

In addition to small, multi-legged creatures, bug has several other meanings.

How to Use Insect Correctly

Insects are small creatures with three-part bodies. Many of the creatures you may mistake for bugs are insects, including ants, bees, butterflies, grasshoppers, flies, fleas, mosquitoes, and more.

Insects are pancrustecean hexapod invertebrates belonging to the class Insecta and the kingdom animalia. There are over a million species of insects. Insects generally have the following:

But What About Arthropods?

Know the Difference Between Words

Some bugs are classified by having clear wings. Learn to distinguish between transparent, translucent opaque. Additionally, some insects are poisonous, so brush up on the difference between poison and venom.