Calvary vs. Cavalry: A Look at the Different Meanings

Does the calvary lead the charge or does the cavalry lead the charge? Did Jesus die on Calvary or Cavalry? These words can easily be mixed up because they contain all the same letters, but once you commit their meanings to memory the difference becomes clear. Read up on the meanings, origins and uses of cavalry and calvary. 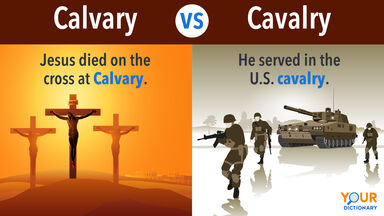 Calvary - Jesus On The Cross vs Cavalry - Battlefield
Advertisement

Mixing up just one letter can change the entire meaning of these two words.

The Origins and Meanings of Calvary

Calvary is a noun or proper noun that has a couple of notable meanings.

Using Calvary as a Place

In its proper noun meaning, Calvary was the place immediately outside the walls of Jerusalem where Jesus was crucified, also called Golgotha in Hebrew.

Using Calvary as a Depiction

Calvary also refers to the artistic representation of the place Calvary and the events that occurred there in the Bible.

Using Calvary as a State of Being

Additionally, calvary can refer to spiritual and psychological anguish and trial. Since it is not a proper noun that refers to a place or depiction of a place, it is not capitalized.

Meanings and Uses of Cavalry

Cavalry has a strictly military meaning, and its origins lie in its name. The word cavalry comes from the French cheval which means “horse.” In the past, soldiers who rode and fought on horseback formed a cavalry. While horses are not widely used nowadays, the military still has cavalries. Now, however, they have traded horses for armored vehicles and aircraft. A cavalry is also a group sent out in times of emergency or for rescue missions.

Tips to Remember the Difference

To remember the difference between cavalry and calvary and whether to put the "l" or the "v" first, remember the origins of the words.

The spelling of words matters and so do the meanings. By remembering the meanings of calvary and cavalry, you can also remember the spellings. Review some similarly confused words where the order of letters makes all the difference such as break and brake. Then, explore other words of French origin like fiancé and fiancée or bougie and boujee.