English can be udderly confusing. Even if you know all the right rules, it's easy to mix up irregular plural nouns. For example, when you’re talking about more than one calf, is it calves or calfs? Simply put, it’s calves, but it’s an easy mistake to make. I debated with my friend about it, and it taurus apart. 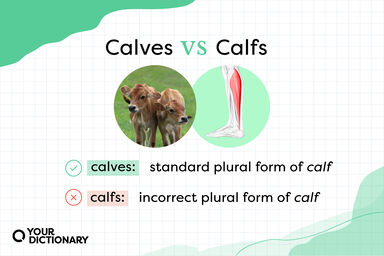 Side-by-side photos of 2 baby cows and the bottom of a person's leg to illustrate the definitions of "calves" and "calfs" as detailed in the article.
Advertisement

“Calves” or “Calfs”: Pluralizing Nouns That End in “F”

The big confusion about calves and calfs comes from the weird way that plurals form out of nouns that end in “F.” Sometimes, it’s easy, and you just add an “S” to the singular form of the word. For example:

However, for other nouns that end in “F,” you form a plural by changing that “F” into a -ve before adding an “S.”

Calves goes into that second category. The difference might seem arbitrary, but it mostly seems to occur with nouns that end in -lf, as in shelf (shelves) and wolf (wolves). Of course, this isn’t a universal rule, as the plural of gulf is gulfs.

What Is a Calf?

Calf (pronounced “kaf”) is a noun that refers to a baby of the bovine family (like cows and buffalo), but it can also extend to the young of whales, elephants, hippos, and camels.

Calf is also a noun referring to the fleshy back area of the leg below the knee, as well as the main muscle group making up that area.

How To Use “Calves”

Calves (pronounced “kavz”) is the correct plural form of calf. Use it whenever you need to refer to more than one baby bovine or more than one of the leg muscles.

“Calve” as a Verb

Calve (pronounced “kav”) is a verb meaning “to give birth to a calf.” It can also mean “to detach or throw off a mass of ice” when used in reference to an iceberg or glacier.

Is “Calfs” Ever Correct?

Some people insist that calfs is the plural form when referring to the leg muscle group, while calves applies to the baby animals, or vice versa. In reality, calves is the plural for all forms of calf, whether you’re talking about the baby cow or the part of the leg.

Controversially, calfs is an acceptable word in word games, and some dictionaries consider calfs as an acceptable plural noun, especially when referring to calfskins. However, in every other instance, use calves.

What Is a Group of Cows Called?

A group of cows or other bovines is called a herd. It comes from Old English heord, meaning “a company of domestic animals.” Herd is also one of those neat words that you can apply to a group of almost any land-based animal.

Other Words With Two Plural Forms

Because English continues to be beautiful and immensely confusing, some words that end in “F” do use two plural forms.

And if we’re just friends talking about animals, note that the plural of octopus can be octopuses or octopi.