Should You Use Can or May? An Explanation Everyone Can Understand

Has anyone ever corrected your request for permission from “Can I please” to “May I please”? The difference between can and may matters quite a bit to strict grammarians, but not as much to the average English speaker. Learn when to use these words in conversation with a selection of can vs. may examples. 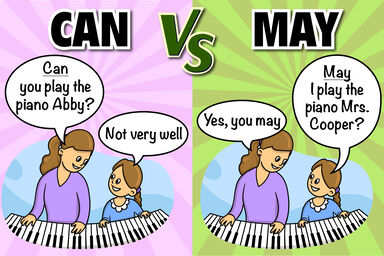 Can vs May Example
Advertisement

Can and may are both modal verbs that express mood when used with main verbs. However, whether they are interchangeable or not depends on whether the context requires classic usage or modern speech.

The traditional definitions of each word are:

Using can and may in a traditional context is simple, because they do have separate meanings. Where it gets tricky is when you want to ask for permission, such as in can I vs. may I? May is the traditional choice for asking permission; however, the overlap in the meaning of can makes it another modern option.

A Difference in Tone

Take a look at these two nearly identical questions:

The main difference between these sentences is their tone. May makes the first sentence sound more formal, while can brings the tone of the second sentence to a more casual level. They are both essentially asking the same thing.

Other examples of tone shifts include:

In each of these examples, context clues and common sense tell us that the speaker is not referring to their physical ability to perform the task. Modern usage has made either word acceptable for asking and granting permission, with may more appropriate for formal requests.

Another tone difference between can and may occurs when you use them negatively. Both cannot and may not are best used in a formal setting. When you try to use them as contractions for a more casual tone, you have can’t and mayn’t. Of these options, can’t is much more acceptable in modern conversation.

When to Use Can

There are instances outside of asking for permission when you should use can instead of may. Sentences that convey a person’s ability to do something should always use can (or could, if the answer is less certain). Here are some example sentences in which can is the correct choice.

When to Use May

So, if you can use can to ask permission, when would you use may? Both may and might are the right words to describe an event’s possibility. May is the best choice when it is more likely to happen; use might when it’s less likely.

Some examples of sentences with may include:

The next time someone corrects can to may in your request, let them know that 21st-century use permits you to use both. Learn about other common grammar confusions with an article that clears up the difference between whoever and whomever. You can also read an expert list of examples that explain when you should use at versus in.