The words cannon and canon sound the same when spoken aloud and are spelled almost the same, but they do not share a common meaning. Both words are powerful terms, but they are definitely not interchangeable. It's important to clearly understand the difference between canon vs. cannon before using either of these terms in your writing. 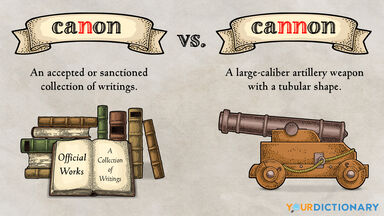 What Does Canon Mean?

What Does Cannon Mean?

The word cannon (kăn'ən) usually functions as a noun. Its most common plural form is cannons, though it can be used as an uncountable noun, which means that the word cannon itself can be plural.

There are a few circumstances in which the word cannon functions as a verb.

Cannon vs. Canon Easy Ways to Tell the Difference

When trying to remember the difference between cannon and canon, use one or more of these simple strategies to help you remember which word to use.

Canon as a Brand

The word Canon is also a company name and a brand name. The companies Canon U.S.A. and Canon, Inc. make and sell a variety of digital imaging products under the brand name Canon. Their products include cameras, photocopiers, printers and more. Because company names and brand names are proper nouns, the word Canon should always be capitalized when used to refer to this business entity or its products.

Canon vs. Cannon as a Last Name

Both Canon and Cannon are used as surnames. Both words can also be used as first names. It's always important to verify the spelling of an individual's name to avoid mistakes when referring to an individual or family in writing.

Since cannon and canon sound exactly the same when spoken and are spelled almost identically, it's not surprising that it can be tough to tell the difference. Now that you have the information you need to tell the difference between these two powerful words, you'll be prepared to use the correct homophone in your writing. While you're thinking about different words that sound the same, review some more examples of homophones. Then, check out other C words that sound similar like council vs. counsel. This will empower you to differentiate between other commonly confused words in the English language.