Canvas vs. Canvass: Surveying the Difference and Usage

If someone asks you to canvass the neighborhood, you may pause in confusion. Shouldn't it be canvas? Would you be right if you corrected their spelling? Does it really matter how you spell canvas or canvass, or are these words interchangeable? 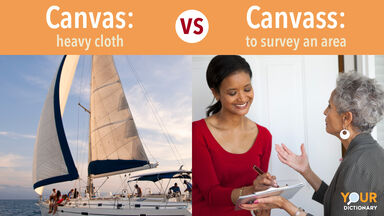 Canvas and Canvass Are Different Words

The homophones canvas and canvass both refer to a covering of some kind. But their exact definitions are quite different.

You always use canvas as a noun to describe a piece of heavy fabric. However, canvass can be a verb ("to canvass a neighborhood") or a noun ("we finished a neighborhood canvass") when referring to the act of surveying or spreading information.

Why Do They Look So Similar?

Canvas and canvass have an interesting word origin. Canvas comes from the Latin word cannibis (hemp), and describes a "sturdy cloth made from hemp." The word canvass came about years later; it refers to "the act of throwing a canvas." Its figurative meaning of surveying an area for information came even later and was spelled with the extra "s" to differentiate the verb canvass from the noun canvas.

You're most likely to see (and use) the noun canvas in everyday speech. When used with the item it's describing, it becomes a compound noun, such as "canvas sail" or "canvas bag." Additional examples of canvas in a sentence include:

Think of spreading a canvas over a large area and covering it. That's what canvass means: to blanket an area. Canvass is a common term in the context of elections and public communication and can describe spreading information, gathering opinions or searching for something in a given area. For example:

When Is Canvas a Verb?

If the sentences with canvass look incorrect, you may have been using canvas incorrectly. Canvas can only function as a verb when it literally refers to covering an item in canvas. You can canvas a wooden frame or a piece of art when you're putting a piece of heavy fabric on the frame or the art. Otherwise, you're probably looking for the word canvass.

Canvassing the World of Grammar

Confusing word pairs such as canvas and canvass can result in unnecessary spelling mistakes. You may think you're using the correct word, but that extra "s" may send the wrong message! Avoid more spelling slips with some helpful tips on improving your spelling.