Capital vs. Capitol: A Simple Guide to Learning the Difference

Did you tour the capitol building or the capital building? Do you write with capitol letters or capital letters? Capital and capitol only differ by one vowel, but that doesn’t mean they’re interchangeable. Capital has many meanings, but capitol only has one. 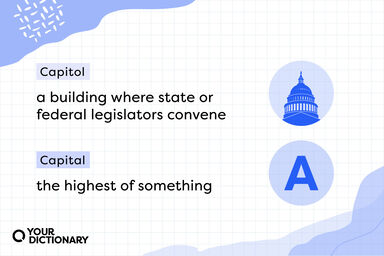 The word capitol is the term for a building in which the legislative body of a government holds official meetings. It comes from the name of the highest Roman temple, the Capitolium (which comes from caput, meaning “head”), also known as the Temple of Jupiter Optimus Maximus.

When spelled with a lowercase “c,” capitol can refer to any building occupied by elected officials. But when you spell Capitol with an uppercase “C,” it only refers to the United States Capitol building in Washington, D.C.

You can use capitol (or Capitol) when referring to an actual building, not the city where the building is located. For example:

The word capital comes from the Latin capitalis, meaning “first” or “principal.” While capitol refers only to a building, capital is much more versatile (and popular) than capitol.

Use capital when referring to:

Because capital has more uses, you’re more likely to see it — and use it — in writing. For example:

Examples of Both ‘Capitol’ and ‘Capital’ in a Sentence

Learning the difference between capital and capitol is one thing, but what happens when they appear in the same sentence? The same meanings apply, allowing you to keep your spelling rules intact. For example:

Remember the Difference Between Capital and Capitol

Still not sure which term to use? Try out this trick the next time you’re choosing between them:

It’s really that simple. Use capitol when referring to a physical building; use capital in every other situation.