Is it Caramel or Carmel? The Sweet, Sweet Difference

Whether you prefer it drizzled over popcorn or covering an apple, caramel is what gives life that extra bit of sweetness. It’s also sticky enough to rip the fillings right out of your teeth. While there’s only one traditional spelling, caramel has a few different pronunciations, which is how some people end up with carmel. However, Carmel isn’t always a misspelling. 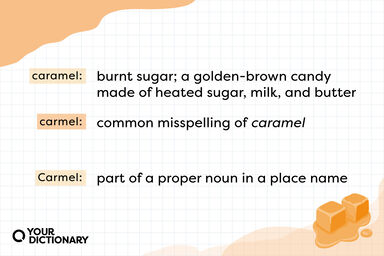 Caramel pieces with caramel vs carmel vs Carmel Definitions
Advertisement

Caramel is a golden brown, sticky candy made from sugar, milk, and butter. Caramel can also refer to a sauce made in the same way as the candy, as well as a golden brown color that resembles caramel. Caramelization is a complex cooking process that essentially results in giving food a brown color while producing nutty, sweet flavors.

The Origin of “Caramel”

Caramel comes from the French word caramel, meaning “burnt sugar,” which is believed to come from Spanish caramello. Some believe that these are rooted in the Latin word calamellis, meaning “little tube,” which may be a reference to the shape of caramel candy. Others believe the root is Medieval Latin cannamella, the word for sugar cane.

How Do You Say “Caramel”?

For such a simple word, caramel can be really complicated to say. Part of that is because it has a few different pronunciations.

That two-syllable pronunciation of caramel is how most people end up with the misspelling of carmel. However, Carmel does have a correct usage as a proper noun used in place names (for example, Carmel-by-the-Sea in California).

The Origin of “Carmel”

As a proper noun, Carmel typically derives from a mountain in Israel named Carmel. This comes from the Hebrew word karmel, meaning “a garden of fertile field.”

How Do You Say “Carmel”?

Carmel tends to take the two-syllable pronunciation of caramel (“car-muhl” or “car-mell”).

Is There a Correct Caramel Pronunciation?

Of the many pronunciations of caramel in the English language, there isn’t really a wrong way to say it. It’s a word that most people will understand and acknowledge regardless of how you say it.

An interesting note: Pronunciation of caramel typically varies based on region. On a larger global scale, the three syllable pronunciations (“care-uh-mell” or “care-uh-muhl”) are more common among British English speakers.

Some people may even switch pronunciations based on context. For example, you might say caramel with three-syllables when you’re just dealing with the candy on its own, but caramel apples might get the two-syllable treatment.