Catalog vs. Catalogue: Sorting Out the Different Spellings

Do you read a catalog or a catalogue? Do you catalog your files or catalogue them? Explore the difference between these two spellings and the reason for their differences, plus how to use them and in what context. 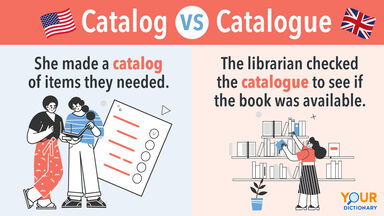 Which Spelling Should You Use?

The simple answer is that both catalog and catalogue are correct. Catalog is more popular in American English, while catalogue is more widely used in British English. Catalogue is a French word that means “a list of items, usually in a particular order.” It typically refers to a list or collection of similar items, such as a catalog of items from a store.

How To Use Catalog

While catalog and catalogue have the same meaning, catalog is generally more common in the U.S. and Canada or in informal writing. It can also be a noun or a verb.

Examples of Using Catalog as a Verb

As a verb, catalog means “to make a list of items” or “to sort based on subject, alphabetical order, etc.” Both catalog and catalogue can be used as a verb in this way.

In addition to being more common in British English, catalogue might be used in more formal situations, such as referring to art.

Keep a Catalog(ue) of Words With Multiple Spellings

Catalog and catalogue are not the only words with multiple correct spellings. Study up on the differences between British and American English. Then, check out words that are spelled differently such as canceled and cancelled or travel and travelled.