Is It Center or Centre? Getting to the Bottom of the Difference

Many words find themselves at the center of grammatical disagreements, but few have a more tangled history than center and centre. The difference between these words is so minimal that you only need to switch two letters around to get the other one — and yet their rivalry is so epic that its world-class dictionary debate spans three centuries and every English-speaking country on the planet. 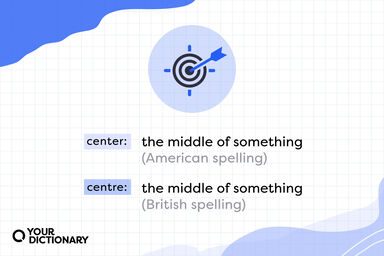 Which Is Correct: “Center” or “Centre”?

The definitive answer to the center vs. centre debate is: Both are right, depending on where you live. All right, that wasn’t very definitive, but it’s true.

Both center and centre mean “the middle of something,” and both are pronounced “SEN-ter” (though it may be closer to “SEN-tuh” if you speak with a British accent).

How To Use “Center” and “Centre”

It’s tempting to say that center and centre are interchangeable outside of regional differences. And for the most part, that’s true — if you’re using them as nouns or adjectives.

But when you use center or centre as verbs, there are some spelling changes to watch out for.

Using “Center” and “Centre” as Nouns

You can use center and centre when referring to the middle position of something, either literally or metaphorically, and usually before the preposition of. Center and centre can also appear in the name of a building or shopping area. For example:

Using “Center” and “Centre” as Adjectives

Center and centre can also function as adjectives to describe a noun that’s in the middle position. However, it’s common to use central in this case (for both center and centre), though central also has a definition of “main” or “primary.” For example:

Using “Center” and “Centre” as Verbs

When you use center or centre to describe the act of making something straight, be wary of spelling changes that occur.

The Shared Origins of “Center” and “Centre”

Center and centre have a shared origin in the Greek kentron and the Latin centrum, both of which mean “a sharp point.” They also referred to the stationary point between a pair of drafting compasses — the “center” of a circle.

The late Middle English word center came before the Old French centre (pronounced “saunt” in French). It began to refer to “the middle of something” in the 16th century, and center was Shakespeare’s preferred spelling as well, as it turned up ten times in his plays (centre appears only once). However, the French-inspired centre became the British spelling convention in the 17th and 18th centuries, especially after British writer Samuel Johnson included centre in his 1755 Dictionary of the English Language.

However, the center vs. centre controversy broke in 1806 (and again in 1828) when American lexicographer Noah Webster listed center, not centre, in his English dictionary. Many linguists credit the worldwide popularity of center to this moment in English history (although the Oxford English Dictionary lists both words together in its definitions).

Why Do British Spellings Use “-re” Instead of “-er”?

Centre is not the only British word that uses an -re instead of the American -er. British writers may argue that the -re form makes it easier to create adjectival forms (central, theatrical, etc.) There are several words with British spelling that reflects their French origins, including:

American Words That End in “-re”

The -re form isn’t exclusive to British and French. Some -re words do remain in American English (such as massacre, acre, and mediocre). But even though these words have -re endings, they’re still pronounced like -er words in American English — with a hard /er/ sound (massacre is “mass-a-ker,” acre is “ay-ker,” mediocre is “me-dee-oh-ker.”)

So why do they keep their -re forms? If these words’ spellings were changed, the pronunciation would be affected (massacer could be “mass-a-ser,” acer could be “ay-ser,” mediocer could be “me-dee-oh-ser”). As always, you’re well served by learning the rules of English spelling — and its many, many exceptions.