Choose vs. Chose: Easy Ways to Know the Difference

Just one letter separates choose from chose, but that single letter is an important one that affects meaning, pronunciation and tense. The words choose and chose are so closely related that they're often used incorrectly in spoken and written communication. Discover a few simple strategies to know how to know when to use choose vs. chose. 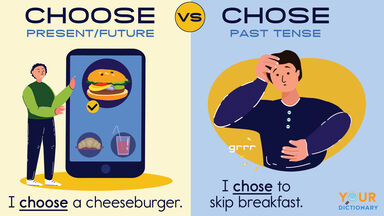 The word choose means to select, pick or prefer something over something else. It is a present tense verb, referring to a choice that is being made now or will be made at some point in the future. Choose is pronounced as (cho͞oz) or (t͡ʃuːz), rhyming with blues and shoes.

The word chose refers to a selection that occurred in the past. It is a past tense verb, referring to a choice or decision that has already been made. It is pronounced as (chōz) or (tʃəʊz), rhyming with goes and toes.

Reviewing example sentences featuring each word can help clarify the appropriate usage of the term choose vs. chose.

Examples of Choose in a Sentence

The following sentences all discuss decisions that are currently in progress or that need to be made in the future. As a result, it is correct to use the present tense word choose in each of them.

Examples of Chose in a Sentence

Tip to Remember the Difference

To help remember the difference between choose versus chose, try to remember that the shorter word refers to what has already happened in the past. The selection is over and done with, so it won't take up any more of your time. The longer version is going on now or in the future, so you'll need to spend more time on it. That's why the word is longer.

Alternate Forms of Choose and Chose

There are a few correct alternate forms of these two words. Discover when to use the correct alternative forms, as well as some incorrect forms that are sometimes used but should always be avoided.

When to Use Chose vs. Chosen

The words chose and chosen are both past tense forms of the verb choose. Chose is a simple past tense verb, while chosen is the past participle form. Combined with an auxiliary verb (like has or has), chosen is used to form the past perfect tense.

Because of the auxiliary verb "had," it is necessary to use chosen vs. chose in the example above.

When to Use Choose vs. Chooses

When to Use Choose vs. Choosing

Choosing is the present participle of the word choose. When combined with an auxiliary verb (such as am or is), it becomes a compound verb used to is in progress at the present time and continues into the future.

These options listed above are the only correct alternative forms of choose and chosen (expressed as a single word).

Now that you're clear on when to use chose vs. choose, you may want to take the time to get familiar with some other tricky word choices. There are quite a few similar word combinations in the English language that can be tough to differentiate. Start by focusing on when to use you're vs. your. Next, focus on making sense of the rules for using there, their and they're. Then, discover how learnt and learned differ. From there, you'll be ready to move on to even more commonly confused words.