When a sad movie strikes a chord with you, it means that you really felt touched by its meaning. But wait — is it "strikes a chord" or "strikes a cord?" Or even "strikes accord?" Learn the difference between chord and cord, which sound exactly the same but have entirely different definitions. 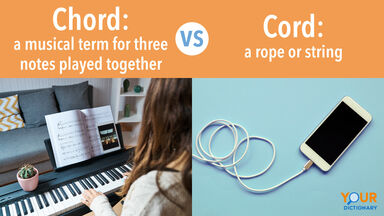 The words chord and cord are homophones: They are pronounced the same way but spelled differently. In addition, they have different meanings:

When a movie strikes a chord with you, it means that it hit just the right note for you (figuratively speaking). Like the harmony of a musical chord, the movie or message sounded like sweet music.

A chord is a musical term that describe the sound of three or more musical notes played in unison. Musicians who play piano, guitar, xylophone, harmonica, or other related instruments play chords by hitting (or strumming) three notes at once. When used as a verb, chord refers to the act of arranging or playing these notes.

Examples of chord in a sentence include:

Cord Refers to Rope or Fabric

You may be able to hear chords, but you can touch and see cords. Thick ropes, thin strings and electronic wires are all considered types of cords. You also use cord instead of chord when referring to human anatomy (such as spinal cord or vocal cord).

Like chord, it's most common to see cord as a noun, but you can use it as a verb as well ("to attach a cord"). For example:

If you've mixed up chord and cord, words like accord may further confuse you. It's spelled like cord, but it means "harmony" like chord! Which spelling do you choose?

You're not the only one who's confused. The Old English word accord is related to the modern word chord, which used to be spelled cord. Our modern word cord (meaning "rope") comes from the Greek khordē (meaning "string" or "mathematical line"). In the 18th century, chord and cord were both spelled cord, which was even more confusing. So the spelling for the musical term was changed to chord. That's how accord and chord are related, but not accord and cord.

Why Confuse Chord and Cord?

So if these words have such varying definitions, why do people mix them up? One answer could be the construction of a musical instrument. A guitar plays chords when someone strums its strings — also known as cords. Just this association may be enough to confuse many writers.

Another source of confusion could be the anatomical term vocal cords. These bands of muscle tissue are literal cords in your body, but you use them to sing. This musical connection causes many people to mistakenly write "vocal chords," which is incorrect.

How to Keep Your Cords (and Chords) Straight

Because chord and cord sound the same, their difference only matters when you're writing the words. Remember these tips when writing chord or cord:

The next time you're wondering about chord vs. cord, consider what you're describing. If it's related to music, use the word with an "h;" if you can see it and tie it, use cord. That way, your grammar skills can truly sing! For more information about easily confused words, check out the difference between alumni vs. alumnus.