Cite vs. Site vs. Sight: Making the Difference Clear

Do you cite or site sources in an essay? What's the difference between site and sight? Even though these three words sound exactly the same, they have totally different meanings. Learn when to use site vs. cite vs. sight with these definitions and examples. 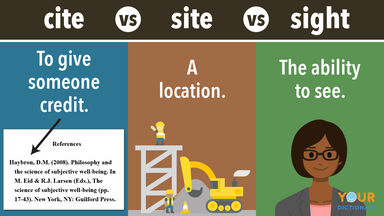 Difference Between Cite, Site and Sight

Cite, site and sight are easy to confuse because, despite their different spellings, they sound the same when spoken aloud. However, once you get a handle on their distinct meanings, the difference will become clear.

Quick Tips to Remember the Difference

If you need to make a quick decision on which word to use, focus on these key tips:

Because these words are so different, it's best to know which one you intend to use. Your spellchecker might not notice if you use the wrong word, but your teacher — or your readers — definitely will!

Meaning and Use of Cite: To Give Someone Credit

Of these three words, cite is the only one that only functions as a verb. It comes from the Latin citare and the Old French citer meaning "to call." The most common modern definition refers to citing one's sources when using a quote or idea from another person's writing. It can also refer to providing a similar example or even an influential figure. For example:

Using Cite to Give Praise

Another common use of cite is when you recognize someone for something or praise someone for doing a good job. Examples of this usage include:

Meaning and Use of Site: A Location

Site, which comes from the Latin situs ("position"), functions as both a noun and a verb. You're probably most familiar with the noun form, especially when it's used in a compound word to describe a location. For example:

Using Site as a Verb

You can also use site as a verb. The verb form is most common in architecture and civil engineering and refers to placing a position or location. Some examples include:

Site is also used when referring to something that is "on-site" at a place.

Meaning and Use of Sight: The Ability to See

Unlike cite and site, sight does not come from Latin. It comes from the Old English gesiht and the German sicht, both of which mean "ability to see." Today, sight means both the sense of seeing and the thing you are seeing, such as in the word sightseeing.

You can use sight as a noun and a verb, but like site, it's more commonly used as a noun. For example:

Using Sight as a Verb

Another function of sight is the verb forms "to sight" or sighted, which mean "to catch sight of" or "to aim." For example:

Cite, Site and Sight are Homophones

Now that you know the different definitions and origins of cite vs. site vs. sight, you can tell that the only thing they have in common is their sound. That makes these three words homophones — words that are spelled differently and mean different things but are pronounced the same. Learn more about homophones with an explanation of break vs. brake. You can also check out more examples of homophones if you're curious about words that sound the same but function differently.