Color vs. Colour: Why the “U” Makes Little Difference

The world is home to 10 million colors. That’s a lot of crayons, which, according to Crayola, range from Mango Tango to Fuzzy Wuzzy. Amid the Manatees, Neon Carrots, and other shades of color, one of the greatest divides still remains: Is it color or colour? While they mean the same thing, color is preferred in American English, and the British favor colour. Why is there a difference? 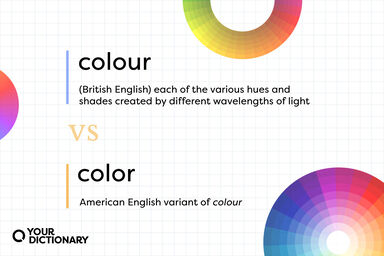 “Color” or “Colour”: Which Is Correct?

Color and colour both refer to each of the various hues and shades that you see when light hits your eyes.

There isn’t any right or wrong here. Colour just happens to be the British English preference, while color is the American English variant.

Despite being neighbors to our immediate north, Canadians actually tend to stick closer to British English with a lot of spellings. That means Canadian English speakers are more likely to use colour over color.

Similarly, Australian English is more likely to favor (or favour) British English spellings. That means that our friends Down Under are more likely to write colour.

How To Pronounce “Color” and “Colour”

Despite that extra “u,” both color and colour are pronounced the same (“kuh-ler”). Insert your regional accent of choice.

“Colour” or “Color”: Which Should You Use?

It’s not exactly a strict rule, but you should stick to color if you speak American English and colour if you speak British English. This also applies to related words, like colorful and colourful or color-coded and colour-coded.

Your American teacher will correct you if you write colour on a paper. Writing color or colour in a text or email with someone new will also immediately clue them in on where you’re from.

Should You Switch Your Usage?

Depending on your relationship with whom you’re writing to, adding or removing that “u” can seem weird, especially if you’re not changing any other part of your writing from American English to British English, or vice versa. Most people may not even notice.

It’s ultimately not a big deal. People will understand you either way. Whether you use colour or color, stick with what you’re used to.

Where Did “Color” and “Colour” Come From?

While the concept of color has existed since the dawn of time, color (and colour) didn’t come around until around the 13th century. There might be multiple origins for color and colour, though the two main roots seem to be French and Latin.

The Addition of “U” in UK Spellings

Some British English words add an extra “u” that doesn’t exist in American English words. Colour is one of the most well-known examples, but other include:

There are a few different theories about this. Most people believe that, much like baguettes and the Etch-a-Sketch, we have the French to thank for that extra “U.” Remember, the French word is couleur. Some English words were adapted from French and kept that -our ending.

While the British clung to the linguistic roots of that extra “U,” America wanted to embrace modernity by removing the extraneous “U.” This was also a means of differentiating the language and building a distinctly American lexicon.