It's important to know the difference between concave vs. convex because the two words have opposite meanings. Getting these terms mixed up in your writing can result in significant misunderstanding. Master the basic differences so you can use the words concave and convex in your vocabulary with confidence. 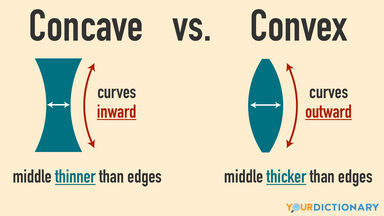 The words concave and convex come up in many math and science classes. These two words are closely related to one another. Both words can be used as a noun or as an adjective. They differ in that each word describes a specific shape. A concave shape is the opposite of a convex shape.

The terms concave and convex are most commonly used as adjectives. When used as an adjective, these words describe the shape of an object, by specifying whether the object curves inward or outward.

The words concave and convex describe the direction that an object curves. Because concave shapes curve in and convex shapes curve out, each of these two words describes opposite shapes.

The words concave or convex can be used as nouns. When used this way, the terms will be used to name specific things rather than being used to describe the shape of another object.

How to Remember the Difference Between Concave and Convex

Remembering which shape (convex or concave) curves in can be challenging because the two terms sound so similar. In order to help make sure that you remember which word represents which shape, use this simple trick.

Concave and Convex in the Real World

There are several examples of concave and concave shapes in the real world. From trips to the amusement park to eyeglasses to correct your vision, the concepts of concave and convex impact many aspects of daily life. That's one reason why it's so important to use these terms correctly.

If you've ever stood in front of a mirror that made you appear a different size than what you really are, you have experienced either convex or concave mirrors in action, or maybe even both. Funhouses at amusement parks often have both kinds of mirrors to amaze visitors by how different their image can look from one mirror to another.

Concave vs. Convex in Spinal Curves

Rather than being straight up and down, a person's spine (backbone) has curves in it. Not everyone's spine has identical curves, as there are several factors that can impact exactly where and how a person's spine curves. However, a spine does have both concave and convex curves.

Concave vs. Convex Lenses in Eyeglasses

The lenses in a pair of eyeglasses aren't just flat pieces of glass. The type of vision problem(s) a person has will impact whether their glasses have concave or convex lenses. Some eyeglasses, such as bifocals, use both types.

The deeper you get into math and science classes, the more scientific terminology you'll need to master. Now that you know the difference between concave and convex, it's a good time to explore some other scientific lingo. Start by exploring the basic taxonomy of living things. Then, discover the subtle differences between other science terms like mass vs. weight. From there, you may want to explore some examples of organic compounds. There are always new terms to learn and concepts to explore!