Concurrent vs. Consecutive: Time Makes All the Difference

If you’ve committed two crimes and the judge gives you the choice of serving your sentences concurrently or consecutively, which would you choose? (The judicial system is very generous in this imaginary universe.) Hopefully you know the difference between these two time-related words, because otherwise you may be in for some serious time in the Big House. 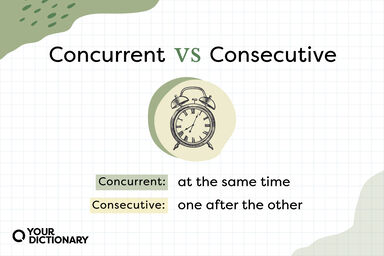 Concurrent: At the Same Time

Using ‘Concurrent’ in a Sentence

It’s easy to use concurrent (or the adverb concurrently) in a sentence if you know its meaning. For example:

Other Words With the Root ‘Cur’

You may have spotted the root word -cur meaning “run” or “happen” in concurrent. It comes from the Latin currere (“to run”), as does:

Consecutive: One After the Other

If your criminal alter ego chose consecutive sentences, on the other hand, you’d serve twice as much time. Consecutive means “one after the other” and comes from the Latin consecutivus (“to follow”). Serving two 10-year sentences would result in a total jail time of 20 years, whereas serving them concurrently would only result in 10 years behind bars.

Using ‘Consecutive’ in a Sentence

You can use consecutive and the adverb form, consecutively, like this:

Other Words With the Root ‘Seq’

Unlike the root word -cur, the root -sec (or sometimes -sequ) means “after,” as in:

Are there more word pairs that confuse you from time to time? Check out: