Confident vs. Confidant: They're Not the Same

At first glance, confident and confidant look pretty much the same. They even have the same origins, since they’re both derived from the Latin confidere (to put trust in) and the French confidente (having full trust). But which word should you use to describe yourself, and which one describes your trustworthy BFF? 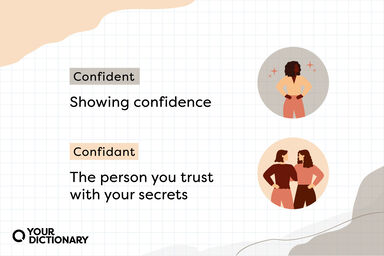 Confident (CON-fih-dent) is that great, no-doubt feeling when you’re sure about something. It’s an adjective that evokes trust, whether it’s in yourself (self-confident) or in another person. With its first recorded usage dated to the 16th century, confident is older than the similarly spelled confidant. It’s also much more commonly used today — so chances are, if you’re trying to decide between confident vs. confidant, you’re probably looking for confident.

Confident only functions as an adjective to modify a noun. If you want to use it as a noun to describe the state of feeling confident, you want the word confidence.

Examples of confident in a sentence include:

Confidant: The Person You Trust

Confidant (con-fih-DAHNT), on the other hand, describes the person whom you trust more than anyone else — the person to whom you “confide” secrets. Despite it being spelled nearly the same way, confidant uses more of a French pronunciation than confident, making it important to use the right word in spoken conversation as well as writing.

Confidant was first used in the 17th century to describe “a person to be trusted,” derived from confidence. Your confidant is whom you are most confident will keep a secret.

So how do you use confidant, and how is it different from confident in a sentence? Some examples of using confidant may include:

You may also see confidant spelled confidante (also pronounced con-fih-DAHNT), which historically describes a woman with whom you trust your secrets. However, as English becomes a more gender-neutral language, the difference between confidant and confidante doesn’t matter as much. Feel free to use whichever spelling you prefer.

Be Confident In Your Word Choice

Does one letter really make a difference? It certainly can. Learn more about how a slight spelling change can shift the meaning of a word.