Conscience vs. Conscious: A Thoughtful Comparison

Using correct grammar can help you become a more conscious writer — and it's good for your conscience, too! These words are often confused because they sound so similar. Although they both involve the mind, conscience and conscious have different grammatical and psychological meanings that writers should know. 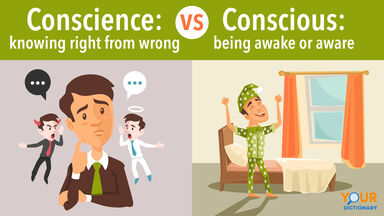 Conscience - Shoulder devil and angel vs Conscious waking up
Advertisement

Should I Use Conscience or Conscious?

While these words come from the Latin root consire, which means "the awareness of guilt", there's a slight difference in pronunciation between conscience (CON-shence) and conscious (CON-shus). But the biggest difference between these words is their meanings.

The word conscience is a noun that describes one's ability to tell if an action is morally right or wrong. Psychoanalyst Sigmund Freud believed that the conscience is part of the superego, which contains your value system.

Examples of consciences from movies and cartoons include:

Examples of Conscience in a Sentence

You'll typically see the word conscious used as a noun, usually after a possessive noun or adjective. Examples of conscience in a sentence include:

A common English idiom is "in good conscience," meaning that you're doing something because you think it's right. For example:

Conscious is an adjective that describes one as awake or alert. It's the other part of Freud's psychoanalytic theory that refers to one's ability to process the world around them. You'll find conscious in the following common words:

Examples of Conscious in a Sentence

Unlike the noun conscience, you use conscious as an adjective. For example:

Quick Tips for Remembering the Difference

If you need to remember the difference between conscience and conscious, keep these tips in mind.

Another word that gets mixed up in the conscious vs. conscience debate is conscientious. If you are a conscientious person, you act with your conscience to do what is right. It can also mean "very detailed" or "precise." For example:

Let Your Grammar Be Your Guide

While your conscience guides your moral compass, your knowledge of grammar can guide your writing. Every time you learn the difference between word pairs like conscience and conscious, you become a stronger writer! Keep the lesson going by clearing up misunderstandings between adverse vs. averse.