Continual vs. Continuous: Know Which Word to Use

The words continual and continuous are very similar in terms of how they sound when spoken, how they are spelled and what they mean. However, even though these words have very similar definitions, they don't mean exactly the same thing. Get the information you need to know which word to use when faced with choosing between continual vs. continuous. 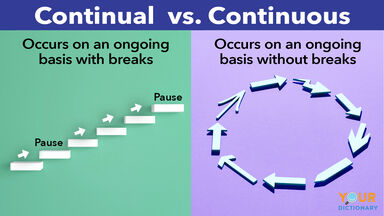 Continual vs. Continuous: Similarities and Differences

The words continual and continuous are both adjective forms of the verb continue. The definitions of these words do overlap but do not mean the same thing.

The verb continue means to occur on an ongoing basis or to persist. It can also refer to moving forward with or returning to an activity after it has been discontinued. This basic definition accurately describes the core meaning of both continuous and continual.

How Do Continual and Continuous Differ?

The difference between continual and continuous lies with whether the action occurs in a non-stop fashion or if it is something that stops and then starts again.

This same difference applies when you consider continuously vs. continually, which are adverb forms of the word continue.

Continual vs. Continuous: Shades of Meaning

Because continuous and continual are so similar, it's easy to get them mixed up. Review the following examples of how using these words impacts what a sentence means. This can help illustrate why it's so important to choose the right word.

It would be correct to describe Seattle as a city that experiences continual rain (not continuous rain).

Under ordinary circumstances, human beings breathe continually. People have to breathe in order to survive. With the exceptions of deliberately holding one's breath or a medical condition that keeps a person from being able to breathe on their own, a person's breathing does not stop and start.

When you set a central air conditioner or heating system to maintain a certain temperature, you are setting it up to run for continual (not continuous) operation.

Should you say that a person has a continuous snacking habit or a continual one? It depends on what the person does!

Would it be correct to describe a business as seeking continuous improvement or continual improvement? Are its leaders always seeking to improve, or do they take breaks from trying to get better?

There are a few other words that could easily be confused with continual vs. continuous.

Continuous vs. continual and continuously vs. continually aren't the only similar words that are hard to distinguish between in the English language. Now that you know when to use these words correctly, and how your meaning could be impacted if you don't, take the time to further explore the differences between words that may sound like synonyms but aren't. Start by reviewing some of the most commonly confused words to verify that you're using those terms correctly. Next, discover the differences between other similar words such as nauseous vs. nauseated. Then, explore more confusing time debates with began vs. begun.