The Difference Between Council and Counsel: Which Should You Use?

When you consult a lawyer, are you seeking legal counsel or legal council? The answer depends on what you’re looking for — and how many lawyers you’re asking. Though counsel and council have the same origin and pronunciation, they’re not the same word at all. 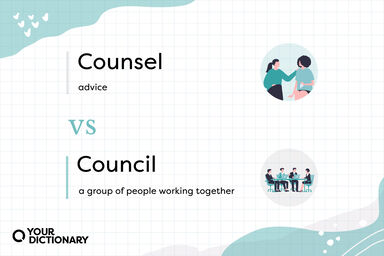 The word counsel refers to advice or help, both legal and otherwise. It can also describe an attorney who provides advice or representation in a legal proceeding. Derived from Latin, like many legal terms, counsel comes from consilium (meaning “consultation, opinion”) and has a root in the 13th-century Old French counseil, which led to the English consult.

Examples of ‘Counsel’ in a Sentence

Counsel functions as a noun and as a verb. When used as a noun, counsel refers to “advice provided to someone.” For example:

When used as a verb, the word counsel refers to “the act of advising.” Alternate forms include counseled (past tense) and counseling (present participle) in American English. In British English, the alternate forms have two l's (counselled and counselling). Examples of counsel as a verb include:

‘Council’ Means a Group of People

The word council is a collective noun for a formal group of people who collaborate on issues. It comes from the Latin concilium, like counsel, but with a meaning of “assembly.” It also comes from the 13th-century Old French word concile, meaning “meeting.” Traditionally and today, councils resolve problems, make decisions and/or establish rules and regulations.

Examples of 'Council' in a Sentence

Unlike counsel, council functions only as a noun. For example:

Council vs. Counsel: Sentences With Both Words

There may even be times when both counsel and council appear in the same sentence. For example:

Another way people confuse counsel and council is with the homophones counselor and councilor. Each word describes a person, but they have different roles.

When speaking, the difference between counselor and councilor (and counsel and council) may be slight or nonexistent. But when writing, it’s important to spell each word correctly, as their close meanings may result in confusion for the reader.