If you’re a fan of aquatic crustaceans, you’ve probably heard of crawdads. Or crawfish. Or crayfish. Yeah, it turns out these weird little water creatures (that aren’t the same as shrimp) go by a ton of different names and spellings, and none of them are actually wrong! It just depends on where you live. 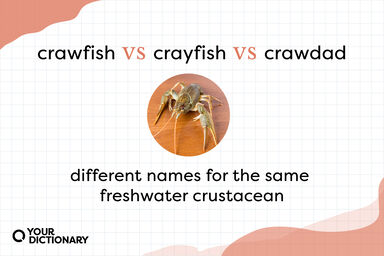 Photo of crawdad with all three names above it and note that each name applies to this type of crustacean.
Advertisement

What Is a Crawfish?

Despite the name, crawfish aren’t actually fish. They are a type of freshwater crustacean that looks more like (and is more closely related to) lobsters. Found all over the world, crawfish also come in all kinds of colors and shapes.

From survey data, crawfish is the most common name for these little critters with about 37% of people in the U.S. using the word. In terms of regionality, crawfish is mostly used in the Southern United States, especially in Louisiana, where the crawfish is the official state crustacean.

“Crawfish” Usage Outside the U.S.

But for further confusion, crawfish is also used as the colloquial term for the European spiny lobster, found mainly off the western coasts of Great Britain and Ireland, in the north toward Shetland, and off the northeast coast of Scotland.

Origin and Pronunciation of “Crawfish”

Despite it being the most common word referencing the crustacean, crawfish (pronounced “KRAW-fish") came about around the 1620s as a variant of crayfish. The verb form of crawfish originated in the 19th century.

The Verb Form of Crawfish

One special thing about crawfish is that it’s also a verb. To crawfish means “to physically back out or retreat from a position.”

What Is a Crayfish?

If you’re in the U.S., a crayfish is the same thing as a crawfish. It just happens to be the second most common word for these animals in the country. Crayfish is more commonly used in the American North and Northeast.

“Crayfish” Usage Outside the U.S.

Outside of the U.S., things can get a little confusing. In the UK, crayfish may refer to the European spiny lobster just like crawfish. In New Zealand, Australia, and South Africa, rock lobsters are sometimes mistakenly categorized as crayfish.

Origin and Pronunciation of “Crayfish”

Crayfish is pronounced “KRAY-fish.” It comes from the Old French word crevice, which morphed into the Modern French word écrevisse. Both of those words simply refer to the small crustacean we’ve been talking about.

English speakers probably misheard pronunciations (crevice likely sounded like “cray-veese” in Old French). That second syllable sounded enough like fish, compounded with the idea that anything in the water must be a fish, and you get crayfish.

What Is a Crawdad?

Crawdads are the third most common name for these hard-shelled critters. If you hear people around you saying crawdad, you’re probably west of the Appalachians, all the way to the West Coast of the United States.

Origin and Pronunciation of “Crawdad”

Where did crawdad come from? Are there crawmoms and crawuncles? There’s no well-known answer for how we got to crawdad (pronounced “KRAW-dad”). The first part comes from the crawfish, and theories suggest that -dad might be a remnant of the word doodad, a word for something that you don’t really know the name of.

That also gave way to crawdaddies and crawdids.

Delia Owens wrote the novel Where the Crawdads Sing, which was also made into a movie in 2022. Unfortunately, crawdads can’t actually sing, but they can reportedly make noises in and out of the water. This sounds less like a throaty baritone and more like clicks or Morse code.

Crayfish, crawfish, or crawdads — whatever you call them, you can eat them right up (most of the time). Crawfish are an important part of global cuisine.

In the United States, they are most common in the South, particularly in the Cajun and Creole cuisine of Louisiana, where crawfish boils are the standard means of preparation and a communal celebration in themselves. The crawfish are boiled in a massive pot with heavy seasoning and other ingredients, including potatoes, onions, corn, and sausages.

Crawfish are a little less common in the North as wild crawfish are typically too tiny to even eat. But don’t worry, if you want good crawfish, you can usually find it (imported from the South) at your local grocery store.

Other Names For Crayfish, Crawfish, and Crawdads

If you’d believe it, there are even more names for these miniature lobsters. However, crayfish, crawfish, and crawdad remain the most common, and if you’re ever unsure, you can just pick from those three.

In Australia and New Zealand, some people do away with the fish part entirely and just refer to crayfish as cray.

Fully moving away from the crawfish construction, we have yabbies. This is another word that is primarily used in Australia with Aboriginal origins.

Kōura is a Maori word that specifically refers to two species of crawfish found in New Zealand.

They look like bugs. They live in muddy, swampy areas. You get it.