“Defence” vs. “Defense”: Which Is Correct?

One of the most frequently repeated lines among coaches, announcers, and aficionados across all sports is, “The best offense is a good defense.” It’s one of those weird little phrases that has seeped its way into everyday life, from video games to boardrooms, and while you could argue the merits of a good offense versus a good defense, the real question plaguing everyone’s mind is: Is it spelled defense or defence? As it turns out, both spellings are correct. 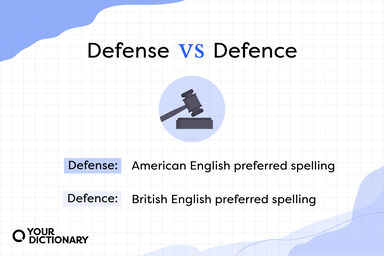 "Defense" and "defence" with text explaining which spelling is used in American English and which is used in British English.
Advertisement

Both defense and defence are correct spellings for the same concept. The one that you choose largely comes down to where you live.

Defense is the preferred spelling for those who write American English. People who write British English, which includes those in the UK, Ireland, Australia, and Canada, are more likely to use defence.

Inflected Forms of “Defense” and “Defence”

However, things get a little weird for any suffixes that start with “i.” In that case, regardless of regionality, both American and British English spellings revert to using the “s.” For example:

What Does “Defense” or “Defence” Mean?

Defense and defence are nouns that can mean a few different things based on the context.

Some people may use defense or defence as a verb, but that is extremely rare, even in sports, where most people will favor the easy and convenient verb defend.

How To Pronounce “Defense” and “Defence”

Defense and defence can have some interesting variations based on the application. For both words, the pronunciation for most things is “duh-FENSE” or “dih-FENSE” with the stress on the second syllable.

However, the biggest variation comes with sports. While British English speakers still use the general pronunciation rules, even when it comes to defenders on the field, American English speakers use “DEE-fense” (stress on the first syllable) when referring to sports. This is why you might see signs with the letter “D” and the picture of a fence in a sports crowd.

Note that that pronunciation applies to team sports and specifically to the schemes, actions, and strategies occurring on the court or field.

British vs. American English: Other Words With “C” and “S” Variations

British English Words That Use Both Variations

There are a few instances where British English will use both the “c” and “s” variations for different purposes. For example, British English includes both license and licence. Licence is the noun form, while license is the verb form. In American English, license serves as both the noun and verb.