Definitely vs. Definitively: Or Is It Defiantly? 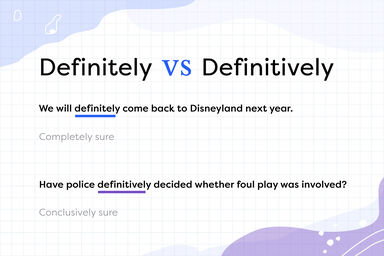 The adverb definitely comes from the Latin definitus, meaning “defined” or “limited.” It combines the prefix de– (completely) with the root finitus (limit), indicating that something is — you guessed it — definite. There’s no room for doubt when you definitely know something is true.

‘Definitely’ in a Sentence

If you’re struggling to choose either definitely or definitively in a sentence, nine times out of ten, you want definitely. Its meaning is more broad, and it’s a lot more popular than definitively. These sentences use definitely correctly to add certainty to a verb:

When you know something definitively, you’ve done extensive research and have come to a conclusion. It comes from the Latin definitivus, meaning “explanatory,” and is typically used in academic or scientific contexts to indicate that something is final or absolute. For this reason, definitely and definitively are not synonyms; you can definitely know the difference between them because you’re sure, or you can definitively know the difference between them because you read an article that explains it.

Because definitive means “conclusive,” you’ll see it in many Best-Of lists (such as the “Definitive Ranking of Hottest Movie Stars” or “My Definitive List of Worst Boyfriend Traits”). Substituting definite in this context wouldn’t make sense.

‘Definitively’ in a Sentence

It’s more difficult to use definitively in a sentence (which is a clue that you should probably use definitely instead.) Examples include:

It’s Not ‘Definately’ (or ‘Definatively’)

Whichever word you’re looking for, one thing’s for sure: You never include the letter “a” in the spelling of either one. An easy way to remember the proper spelling of definite is to look for finite, as in “A definite answer has finite possibilities.” It’s harder to apply the rule to definitive, but if you’ve got definite down, you won’t spell either one incorrectly again.

Wait, What About ‘Defiantly?’

Does defiantly have anything to do with the definitely vs. definitively debate? Nope, it’s totally different. Defiantly comes from the Latin disfidare (“unfaithful”) and French defien (“to renounce allegiance”) to describe someone who acts in a contrary manner. The only time it concerns definitely or definitively is if you “definitively know that Devon is definitely defiant” (say that 10 times fast).

The Definitive Source for Definitions

Need to clear up more commonly confused words? Check out these guides for help: