Delusion vs. Hallucination: How to Make the Distinction

It’s easy to mix up delusion and hallucination in daily conversation. They both refer to things that are imagined or that other people can’t see or believe. However, delusions and hallucinations clinically and medically refer to two distinct symptoms that you should definitely know how to differentiate. 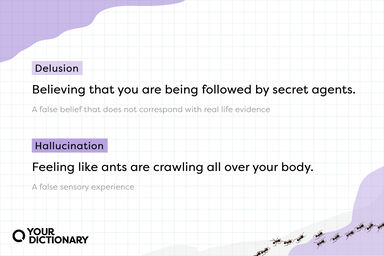 Delusion vs Hallucination (ants icons) With Definitions And Examples
Advertisement

The Difference Between Hallucination and Delusion

The main difference between hallucinations and delusions is how people experience them. Hallucinations are specifically sensory, meaning you have seen, heard, smelled, tasted or felt something that isn’t actually there.

Delusions are conceptual. You may fully commit to a delusional belief even though you haven’t seen, heard, or experienced anything to suggest that belief.

A delusion is a false belief that does not correspond with real life evidence or your lived experience.

Outside of clinical psychology, people use delusional to refer to people who hold any belief considered to be false. For example, people often talk about “delusions of grandeur” when referring to someone who has an inflated sense of self, though actual delusions of grandeur affecting mental health do exist.

The types of delusions a person can have will vary, but some of the most commonly reported delusions include:

Although hallucinations and delusions are distinct symptoms, some mental illnesses, including dementia and Alzheimer’s, may involve both at the same time.