Dependent vs. Dependant: A Reliable Difference

You may have seen the alternate spellings dependent and dependant and wondered if one or both are correct. Dependent is usually the default spelling, so it’s understandable if you assume that dependant is a misspelling. Even spell check might correct you on it! However, both spellings are correct. The difference ultimately comes down to spelling standards. 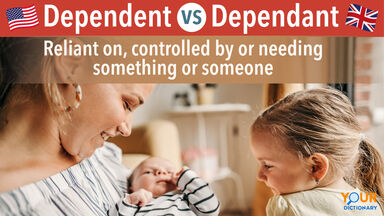 Mother with her children Dependent vs Dependant
Advertisement

The Difference Between Dependent and Dependant

The difference between dependent and dependant comes down to the suffixes -ent and -ant, not their meanings. Both forms of the word are derived from the French dépendant which means “hanging down.” Dependant is the older form of the word, but dependent is more popular in American English. In British English, the alternate spellings are seen as indicators of parts of speech. Dependent is usually used for the adjective form and dependant is used for the noun form.

Meaning and Usage of Dependent

Dependent is ultimately the more popular spelling of the word. It is the standard spelling in American and Canadian English, and it is the adjective form in British English.

How to Use Dependent as an Adjective

As an adjective, dependent means “reliant on” or “contingent on” something.

How and When to Use Dependant

Dependant is only ever used as a noun, specifically in British, Australian and New Zealand English. This spelling is generally not used in American or Canadian English.

How to Use Dependant as a Noun

Dependant is used as a noun to mean “someone who depends on help from others.”

The Difference Between -ent and -ant Suffixes

The key difference between dependent and dependant lies in their suffixes or endings, -ent and -ant. There are rules and exceptions on when and how to use these suffixes.

When to Use -ent Suffix

The base words (a word that can have a prefix or suffix added to it) that take on the -ent suffix typically end in a certain letter or letters. There are some exceptions to these rules, but the -ent suffix can typically be added to words that end in:

When to Use -ant Suffix

Use an -ant suffix with words ending in:

Additionally, in the case of words ending in “y,” the “y” must be changed to “i” before adding the -ant suffix. For example, the word “vary” becomes “variant.” There are notable exceptions for each rule, particularly words ending in "e." Many words that end in "e" will take on the -ent suffix instead. For instance, “confidence” ends in an "e" but takes on the -ent suffix rather than -ant to form “confident.”

When Spelling Depends on Location

Dependent and dependant are variant spellings of the same word. Explore other words that have two commonly accepted spellings with a slight difference, like wholistic and holistic or blond and blonde. Then review American and British English spelling standards.