Desert vs. Dessert: Simple Tips to Remember the Difference 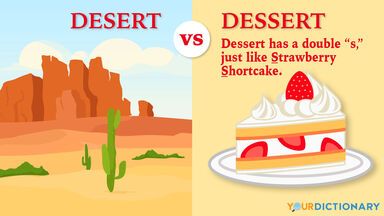 Difference Between Desert and Dessert

While these two words look similar, they mean very different things. A quick look at their definitions will help you clearly tell them apart.

So how can you keep these words straight? If you need a quick, intuitive way to remember the difference between desert and dessert, try out one of these tips.

The Multiple Meanings of Desert

Of the two words, desert is the only one that you can use as multiple parts of speech. It can be a noun, verb or adjective. Depending on the context, it can mean very different things and is even pronounced in different ways.

How to Use Desert as a Noun

desert (n; DEH-zert) - a biome on planet Earth that is characterized by barren land and by a lack of water and plant life

The word desert comes from the Latin desertum, which means "an abandoned thing" or "a wasteland." In this case, it can describe a large expanse of sand or ice (such as Antarctica) where hardly anything can grow. For example:

How to Use Desert as a Verb

Desert can also be a verb. It comes from the Latin desertus, and means:

desert (v; deh-ZERT) - to leave or abandon those who depend on you

You'll typically see this used in military or other official situations. Some examples of desert as a verb include:

How to Use Desert as an Adjective

You can also use desert as an adjective, as in the phrase "desert island." The adjective form means:

desert (adj; DEH-zert) - an area that is unoccupied or desolate

It's based on the same Latin root as the other two meanings, which refer to an abandoned or lifeless place. Example sentences include:

Desert can also be used as an adjective in the form deserted. For example, “This place is deserted” or “You deserted me.”

The Single Meaning of Dessert

Unlike desert, dessert only has one meaning.

dessert (n; deh-ZERT) - sweet course served after a meal that can include cake, ice cream, cookies, or other sweets

It comes from the French desservir, which means "to clear the table" or literally, "unserving," as des- means "removing" and servir means "to serve." Examples of dessert in a sentence include:

A phrase that further confuses matters is the old saying "just deserts," which means "the appropriate punishment." You've probably heard it before, and know that it's pronounced "just deh-ZERTS," so it's easy to assume that it should be spelled "just desserts." But that doesn't make any sense if desserts only means "sweet treat!"

Additionally, an old definition of desert is "consequence or punishment. Just in this case means "justice." So if someone has been served their "just deserts," they're not being served cake or pie. They've received the proper punishment for their crime. So while "just desserts" is often written and is often accepted, the correct form is "just deserts."

Between word origins and the ever-changing nature of the English language, spelling can be hard to master. However, now that you know the key differences between desert and dessert, there's no stopping your spelling progress. Keep the lesson going with these tips on loose vs. lose. Or stick with foods and explore the differences between supper vs. dinner.