Dialect vs. Accent vs. Language: A Spoken Difference

Accents and dialects are closely related elements of language that are often referred to interchangeably, but they have distinctions. The word accent refers solely to the style with which a person pronounces words, while dialect is a broader term for spoken words. Accents can be part of a dialect, but dialects involve more than just pronunciation. 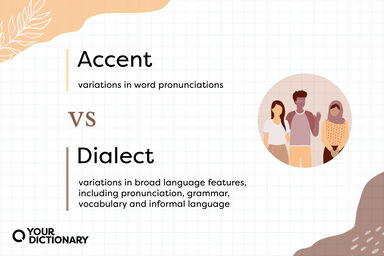 Group of People With Dialect vs Accent Definitions
Advertisement

Comparing Accents, Dialects and Other Elements of Language

Languages of all kinds include nuances that ensure the way you talk may not sound or read the same as someone who lives right next door.

What Is An Accent?

People who are native to or grew up in a certain area or culture tend to pronounce words, use inflections, stress different syllables, or change their overall tone when speaking. That variation in pronunciation is an accent.

A person can speak their native language with an accent, such as native English speakers from the southern region of the U.S. who speak with a southern accent. However, accents can vary within regions. The American South is vast, so there is no singular “southern accent.”

What Is A Dialect?

Accents can be a part of dialects, but dialect refers to an overall way of speaking, not just pronunciation. Dialects involve everything from the usage of distinct vocabulary choices (including slang) to grammar to sentence structure. Dialect is why some people may say “y’all” while people in Philadelphia may say “yinz.”

Dialect can be linked to a particular geographic area. For example, there are many dialects of the Chinese language, including Mandarin and Cantonese. Dialects can also vary based on social class and culture. For example, the cockney dialect of English is associated with working-class people from London.

Dialect vs. Language: What Is Language?

All of the above is part of language. Language is all forms of human communication conveyed through writing, speech and gestures. Language is structured by grammar and vocabulary. Changes to grammar or vocabulary in writing and speech leads to variations in language, like regional dialects and accents.

Where Slang Fits In

Slang can relate to both accent and dialect. Slang is general informal terminology used within specific contexts. It can exist within geographic areas, social classes and occupations.

Where Vernacular Fits In

Vernacular is the common speech of a language as you live with it. When you learn another language, you learn the formal, official rules. When you visit an area where that language is spoken, the people who live there can probably tell that you’re not a native speaker because you’re not speaking in vernacular.

This includes elements of dialect, but also other common elements of everyday communication, such as knowing when to use formal or informal diction.