Dialog vs. Dialogue: A Conversation on Correct Use

Have you ever spelled dialog and thought that it looked like something was missing? Why does one spelling end in -ue, and does it make a difference? Discover all this plus the meanings of dialog and dialogue, when to use them and in what context. 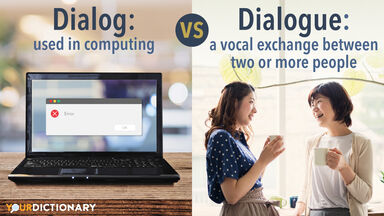 The Difference Between Dialog and Dialogue

On one hand, the difference between dialog and dialogue comes down to American vs. British English preferences. Dialog is typically favored in American English and dialogue is common in British English. However, these spelling variations have taken on distinct meanings in recent years.

While the American vs. British debate is still applicable, the difference ultimately comes down to meaning, and the spellings are used interchangeably.

How and When to Use Dialog

One context where dialog is almost always correct is in computer language. In particular, dialog is used in the phrase "dialog box." According to the inventors of the dialog box, Microsoft, you should use dialog rather than any other variation of the word.

Dialog is also an acceptable alternate spelling of dialogue in American English, although the latter is generally preferred. When using dialog in this context, it still refers to a conversation between characters in a story or a vocal exchange between people, often in the form of a debate or formal discussion.

Dialogue Origins, Meaning and Use

Dialogue comes from a Middle French word dialogue. This comes from the Greek dialogos, which itself comes from dialegesthai meaning “converse with.” While dialogue is typically used to denote conversations between characters in books, movies, and plays, it is also commonly used in politics. In this context, it means "negotiations or discussions" between nations or political entities.

Using Dialogue as a Verb

In North America, dialogue can also be used as a verb meaning "to take part in a conversation" or "to perform dialogue in a movie, play, etc." This can take the form of dialogues, dialogued and dialoguing.

Tips to Remember the Difference Between Dialogue and Dialog

Use this helpful hint to remember the difference between dialog and dialogue. Dialogue is usually the correct spelling. It ends in -e. Think of other related words that end in -e such as converse, state, voice, articulate, declare, vocalize, or verbalize. All of these words mean "to speak," and dialogue is a speech or conversation between two or more people. In contrast, dialog is used in the phrase "dialog box" but is rarely used otherwise except as an alternative spelling of dialogue.

A Dialogue About Spelling

Words with alternate spellings are fairly common in English, including words that end in -ue like catalog and catalogue. Which is the correct spelling, or are both correct? Explore other words with different endings like the multiple spellings of blond and blonde to find out when to use which.