When you hear the word die, you likely think of death. However, pair it with the word dice and you associate die with this staple of casinos and card tables everywhere. But when should you use die or dice and in what context? 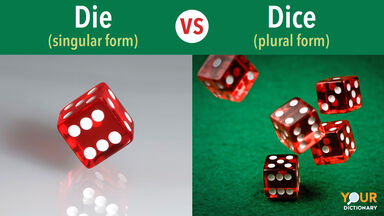 The Difference Between Die and Dice

Die and dice are similar-looking words for the same object. The only difference is that die is singular and dice is plural. Therefore, when you roll the dice, you are rolling two or more cubes. If you roll the die, you are using only one piece.

However, according to the Oxford Dictionary, dice can be used as a singular and plural form of die. So while the standard is usually agreed to be that die is singular and dice is plural, there are disagreements and exceptions to this rule. Six-sided cubes are the standard form for dice, but you can find dice in other shapes with various numbers or symbols on each side for specific games.

Origins and Uses of Die

The word die is derived from the French word des, which is the plural form for the six-sided cube. The singular form in French is dé.

How to Use Dice in a Sentence

The plural form of die is dice. It can be used in many of the same contexts as die but refers to more than one.

There are several common expressions and idioms that mention die or dice.