Difference Between a City and a Town: Defining Places

Understanding what makes a village, a city, or a town is more complex than simply stating population sizes. What makes a town or a city is different around the world, so there isn’t a universal definition. Explore definitions and the differences between a city and a town to settle the town vs. city debate. 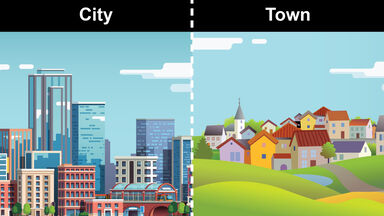 difference between city and town
Advertisement

What Is a City?

The simple definition of city is, “a town of significant size or an urban area with self-government.” The word “city” comes from the French word cite, meaning “town, city.” The French term was taken from the Latin word civitatum, meaning “citizenship.”

Encyclopedia Britannica defines a city as a “relatively permanent and highly organized centre of population, of greater size or importance than a town or village.”

Characteristics of a City

While the size and look of cities varies around the world, there are a few things cities typically have in common.

The first cities in the world are believed to have evolved out of rural villages around 3500 B.C.

Examples of modern cities include the biggest cities in the world such as:

What Is a Town?

The simple definition of town is, “a residential area that is smaller than a city and larger than a village.” The word “town” comes from the Old English word tun, meaning “enclosure, garden, field, yard; farm, manor; homestead, dwelling house, or mansion.” The Old English term comes from the Celtic word dunon, which meant “hill or hill-fort.”

Towns existed before modern states and came about between the 15th and 17th centuries. Towns are said to be “mostly but not exclusively semirural communities,” and popular in the U.S. in the New England states, New York, Pennsylvania, and the north-central states.

Characteristics of a Town

Towns are not as easy to spot as cities because they are often intertwined with villages.

Examples of towns are best found in your local area. These town examples all have official websites you can check out to learn more about towns.

Differences Between Cities and Towns

It is difficult to list differences between towns and cities because every state and country uses different definitions for the terms. If you generalize what’s common throughout the world, you can identify a few key differences.

The Population of a City Is Generally Bigger

For government purposes, the U.S. Census Bureau defines a place as “either legally incorporated under the laws of its respective State, or a statistical equivalent that the Census Bureau treats as a census designated place (CDP)”.

City Status Must Be Granted in Some Countries

In the U.K., for example, a city can only officially be called a city if the British government grants it city status.

In 2018, the House of Commons Library created a place classification system. They suggest six types of settlements with the following guidelines:

Cities Are Governed by Representatives

City vs. Town vs. Village

While village and town are often used interchangeably, they are slightly different. A village is defined as, “a residential area in the country that is smaller than a town.”

Where Do You Live?