Asteroid vs. Meteor vs. Comet: A Difference Written In the Stars

Our solar system, a small corner of the larger Milky Way galaxy, is full of possibly trillions of objects floating through space, orbiting around celestial bodies and sometimes even making contact with planets. Three of the most common of these objects are asteroids, meteors, and comets. 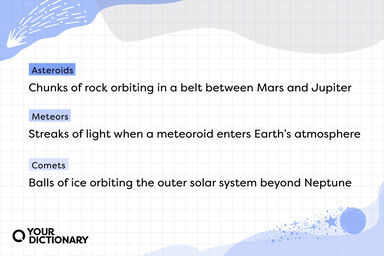 Asteroids are the small chunks of rock that are leftover from the solar system’s formation billions of years ago. “Small” is relative here as the smallest asteroids are about the size of the average sedan. At the high end, asteroids can be as large as dwarf planets.

Most asteroids orbit the sun in a belt between Mars and Jupiter.

Meteors are the streaks of light that appear when a meteoroid enters the Earth’s atmosphere. You might know them better as falling or shooting stars.

Meteoroids are smaller pieces of asteroids, comets and sometimes planets that have broken off and begun floating through space.

Meteorites are meteors that haven’t burned up in the atmosphere and actually hit the planet’s surface.

Comets are balls of dirty ice and dust. Similar to asteroids, comets are also leftovers from the formation of the solar system.

Most comets are found in the outer solar system, orbiting just beyond Neptune. When comets get closer to the sun, their icy bodies melt, releasing gases and dust and creating a visible tail.

Other Objects Floating Through Space

Our solar system is full of so much more than just asteroids, meteors and comets, all floating in that zero gravity.

Named after the human-horse hybrids from Greek mythology, centaurs are hybrids of asteroids and comets that orbit between Jupiter and Neptune.

Technically referred to as orbital debris, space junk is all of the human-made junk that we left in space, including abandoned launch debris and nonfunctional spacecraft.

Space is full of floating rocks and balls of hot gas that truly feel unbelievable. As you contemplate the vastness of our solar system, learn about some of the other things contained within it: