College vs. University: The Difference In the Details 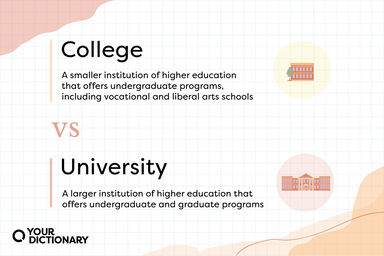 Main Differences Between College and University

Along with their size, colleges and universities can vary based on their curricula, enrollment, admission costs, and more.

What Is a College?

You can generally think of college as a smaller institution of learning with a variety of undergraduate degrees. These degrees can cover a range of credentials from certificates to 4-year bachelor’s degrees.

Two-year colleges are typically known as community or junior colleges. These institutions offer a diverse range of career-oriented, applied certificate and associate programs as well as transfer programs. An example of a community college is the Louisiana Delta Community College.

Examples of Colleges in the U.S.

There are literally thousands of colleges in the country, and thanks to confusing naming conventions, some colleges have university in their names.

What Is a University?

Additionally, universities are typically broken down into different colleges or schools. For example, New York University (NYU) has a College of Dentistry and a College of Arts & Sciences. These are in addition to the Grossman School of Medicine.

Examples of Universities in the U.S.

For further confusion, some universities in the U.S. have college in their name. For example, Boston College is a university, but it can’t change its name because Boston University already exists. The College of WIlliam and Mary in Virginia kept its name out of tradition.

Give It the Old College Try

Choosing between college and university largely comes down to what you’re looking for in higher education and what’s available to you. If you want a more personal focus or tailored career training in your desired field, college might be more your style. If you want a research-focused environment or larger campus experience, a university may have more to offer.