Difference Between Fate and Destiny: Meaning & Use

The universe has an order. No matter how hard you try, you can’t get away from it. However, while fate is set by outside forces, destiny involves choice. Explore fate and destiny in-depth to learn other differences between them. Use examples and fun memory tricks to remember fate vs. destiny. 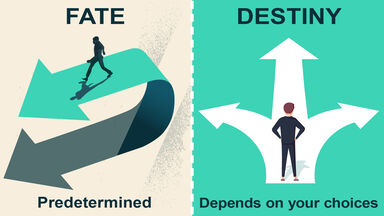 difference between fate and destiny
Advertisement

Fate and destiny can easily become intertwined because both of these terms deal with the future. People also use them interchangeably in conversation. Likewise, the definition of the word can vary slightly based on who you ask. To keep things clear, it’s always best to ask the dictionary.

By definition, fate is those outside forces establishing the preordained path of your life despite what you do. Given its definition, it should come as no surprise ‘fate’ comes from the Latin, fatum, meaning has been spoken.

Need an example of fate? Imagine you get on a bus to go to work and it gets a flat tire, which leads to you missing your job interview. These events were beyond your control. That’s fate.

A simple way to think of fate is to think of the three Fates (Atropos, Clotho, and Lachesis). In Greek mythology, they were the three women spinning strings that determined a person’s cycle of life. You can’t control the Fates!

Fate in a Sentence

Still, having a hard time understanding fate? See how fate is used in a sentence.

Fate is outside of your control. However, you can shape destiny with your choices. Why? Because destiny is your future. Coming from the Latin term destinare, which means intended or firmly established, destiny hasn’t already been determined. Therefore, the changes that you make will affect your destiny in life.

Destiny is all about your traits determining your future. And, you have the choice to change your destiny by choosing differently. For example, if you’re a saver and work hard all your life, you’re destined to be wealthy. The different qualities that you possess contribute to your future path.

An interesting way to visualize destiny is to think about walking a path. However, your choice to take a fork in the road changes your path.

Destiny in a Sentence

Want to see the word destiny at work? Check out these fun examples of destiny used in a sentence.

Fate vs. Destiny vs. Chance vs. Luck

You have a good handle on fate vs. destiny now. But when chance and luck get thrown into the mix, it gets discombobulated. To make sure everything makes sense, it’s important to look at what chance and luck mean to see how fate and chance or fate and luck are different.

Chance and luck are easy to get confused with fate. However, by definition, they are random occurrences where fate is a predetermined path. Whether it was your fate to be lucky, who knows?

Difference Between Fate and Destiny

Fate and destiny are both words dealing with a predetermined or destined future. That’s why they are so easy to mix up. However, while fate is concrete and determined by the cosmos, destiny depends on your choices in life.

Looking for more interesting facts about words? Expand beyond the English language to beautiful Latin words. Expand your vocabulary with words like solis occasum.