Murder and manslaughter both result in a person’s life ending prematurely, but these are legally distinct terms. With murder, the death is intentional, while manslaughter results in a person’s death without intent. These legal distinctions lead to different consequences for the perpetrator. 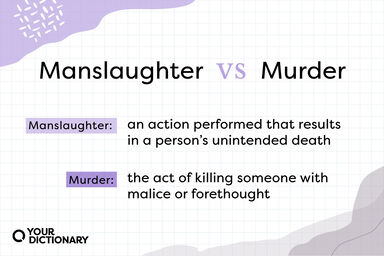 Manslaughter vs Murder With Definitions
Advertisement

Difference Between Murder and Manslaughter: Intent

Murder and manslaughter are both types of homicide, which is the act of killing another person. But determining whether a killing is murder or manslaughter depends on the perpetrator’s intentions. Did they act in order to end another person’s life, or was the death an unintended consequence of reckless behavior?

Exact legal consequences will vary based on jurisdiction, but manslaughter is always considered a less severe crime, resulting in less severe punishment. A charge of manslaughter may result in:

A murder charge comes with more severe sentencing, including:

A prosecutor who wants to charge a suspect with murder must gather evidence to prove that they acted with the premeditated intention to kill the victim. Depending on how much evidence they have, the court can charge the suspect with two degrees of murder (although three states also include third-degree as a possible charge).

Someone who has committed first-degree murder acted with premeditation and the full intention to end another person’s life. It is a willful, deliberate act, and it’s the most serious charge of murder.

Cases that might end in a first-degree murder charge include:

A prosecutor can try for a felony murder change in these situations, but most of the time, prosecutors have more evidence for second-degree murder than for felony murder.

While these may overlap with involuntary manslaughter, notice that nearly every situation occurs in the heat of the moment with high emotions.

The difference between murder and manslaughter has everything to do with intent. However, in the American criminal justice system, it also has to do with legal argumentation, evidence and jury conviction.