The Differences Between Poison and Venom Explained

In the throes of an illness, you might wonder if you’ve been afflicted by poison or venom. While they’re used interchangeably, poison and venom are different toxins. Poison is swallowed, inhaled or absorbed through the skin, while venom is actively injected into your bloodstream via a bite or sting. 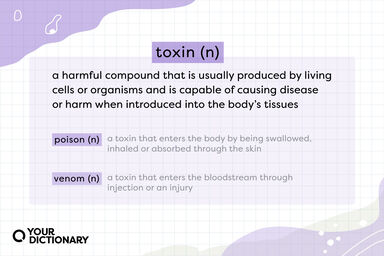 The Difference Between Poison, Venom and Toxin

Poison and venom are both types of toxins. Toxins are chemical compounds created by living organisms that cause harm to other organisms. The key difference between poison and venom is the way that they enter the body.

How To Tell Poison and Venom Apart

Both poison and venom can cause you bodily harm, so telling them apart can be difficult. There are a couple of different ways to think of it. If you touch a poisonous plant, you’ll see a reaction on your skin. If you touched a venomous snake, you wouldn’t be harmed until it bit you.

Another way to think of it is who bites whom: you bite something poisonous, but something venomous bites you.

Poison comes from Old French poison or puison referring to a drink, especially a medical drink. This is related to the word potion.

For added confusion, venom comes from the Old French and Anglo-French word venim or venin, meaning “poison” or “malice.”

The root word of toxin is toxic, which comes from Greek toxikon, referring to a poison specifically applied to arrows. Toxikon itself comes from toxon, the Greek word for a bow.

Examples of Poisons and Poisonous Organisms

Poison is a passive defense mechanism that keeps organisms from being eaten or hurt. Poisonous mushrooms and plants cause harm to animals or humans who eat them, warning their attackers not to eat them again.

Examples of Venoms and Venomous Organisms

Unlike passive poisonous creatures, venom is only created by animals, not plants. These animals use venom as both a defense mechanism and a tool in hunting. The venom is injected directly into the victim’s bloodstream through a bite, sting or other injury.

While poison and venom are highly dangerous, some people consider poison to be the worse of the two as venom requires active delivery from the animal. Thankfully, antidotes and antivenoms can treat poison and venom (respectively).