Both ponds and lakes are bodies of water that are surrounded by land. Both can occur naturally, or they may be constructed by humans. Lakes are generally considered larger and deeper than ponds, but the differences between the two may go even deeper than that. 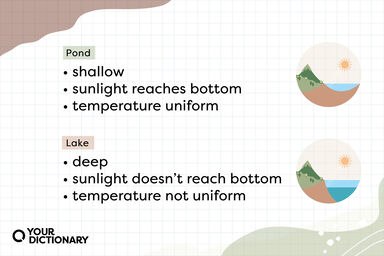 The Difference Between Ponds and Lakes: Depth and Ecology

Technically speaking, there really aren't definite distinctions between the two bodies of water. Both are considered lentic systems, meaning they are bodies of still fresh water. Most limnologists, scientists who study inland water, categorize lakes as having a larger surface area and greater depth than ponds, but this can be arbitrary as there are no precise measurements to define that difference.

Maybe the most significant difference between ponds and lakes comes down to ecology. As ponds are shallower, sunlight can easily reach their floors, leading to greater and more diverse plant growth and wildlife. Lakes are deeper, so sunlight has a harder time penetrating the water, leading to less plant growth.

Where Things Get Muddy: Naming Conventions

The biggest problem with categorizing ponds and lakes is naming conventions, which existed far before the introduction of science and limnology. Bodies of water were named as lakes or ponds arbitrarily, which is how you got small, shallow lakes and wide, deep ponds.

For example, Benxi Lake in the Liaoning Province in China is considered the world’s smallest lake at about 15 square meters (about 160 square feet), while Great Pond, found in Kennebec County, Maine, is about 34.5 square kilometers with a maximum depth of about 69 feet.

Ponds vs. Lakes vs. Other Bodies of Water

You might find it helpful to look at other bodies of water to further differentiate between lakes and ponds.