Difference Between Prejudice and Discrimination Defined 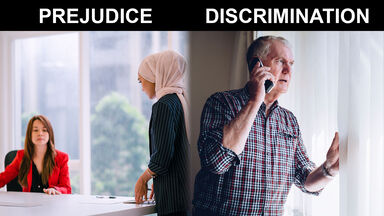 difference between prejudice and discrimination
Advertisement

When applied to the idea of treating people equally, prejudice and discrimination have negative connotations. They both involve an attitude of bias against a group of people. However, there is a key difference between these words.

Here are their definitions:

Prejudice only exists inside a person’s head. Discrimination is how they apply their prejudice to a group of people. Being prejudiced is not a crime, but acting on it by discriminating against a class of people is illegal.

Discriminating can also be a synonym for discerning. For example, a food critic can have a discriminating palate for wine. But in the context of society and biased attitudes, it describes how a person separates other groups of people based on their own prejudice.

Prejudice means “pre-judged.” A person who has prejudiced opinions relies on stereotypes. When meeting someone with a different background from themselves, they may believe they already know everything about that person. However, their prejudice alters their perception and prevents them from learning more.

Some examples of prejudice include:

Notice that none of these situations are based on evidence. Our prior experiences, societal expectations, and life situations work to form prejudices that we may not even know about. That’s why it’s important to recognize our own prejudices in any given situation. Exercising prejudice can lead to discrimination, which can limit opportunities and denies people their civil rights.

Discrimination occurs when a person allows their prejudice to influence their behavior. Discrimination against protected classes is illegal in most cases, as it can violate a person’s civil rights. Here are some examples of discrimination from the prejudice scenarios above:

These types of discrimination all include actions, such as asking someone to leave or calling the police based on your suspicion about their race. These actions directly result in lost opportunities and are based on prejudicial thoughts. Most of all, they unfairly exclude people from society based on incorrect stereotypes.