Difference Between Presume and Assume: Meaning and Use

Many people believe that the words assume and presume are interchangeable. But even though these words sound similar, their meanings are different enough that they are not synonyms. Keep reading to learn the difference between presume vs assume, identify their meanings, and see each word in example sentences. 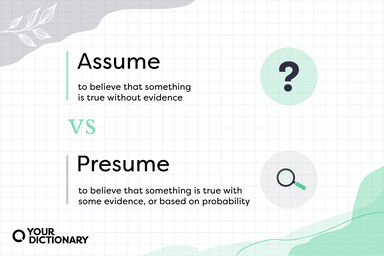 The Main Difference Between Presume And Assume

It’s easy to mix up presume and assume. They’re both verbs that describe coming to a conclusion without knowing all the facts. But check out the slight differences in their meanings:

Additionally, they each have second meanings:

As you can see, the first meanings are more similar than the second meanings. That’s where the error usually occurs when mixing up presume and assume.

Both words come from the same Latin root: sumere, which means “to take upon.” But the prefix for assume was originally ad-, which means “toward.” The prefix pre- in presume means “before.” Therefore, a person who presumes something is true may know information in advance, while a person who assumes something is true is heading toward a conclusion.

How to Use Assume

Need some more examples? You can find additional sentences that use both meanings of the word assume in this article about using assume in sentences.

How to Use Presume

To use presume correctly, you’ll need to include more details in your sentence. Someone who presumes uses past knowledge or observations to come to a conclusion. However, they could still be incorrect because they don’t have all the information.

Check out these sentences that use presume:

These sentences include additional phrases or clauses that provide more information. That way, the characters make presumptions rather than assumptions. For information about using presume in a sentence, take a look at examples of sentences that use presume.

If you still want to see assume and presume in context, try switching them out in your sentence. You’ll find that it’s quite easy to tell the difference between them when there’s enough context clues. For example:

Knowing the difference between assume and presume may help people take you more seriously. After all, having some evidence can be more compelling than having no evidence at all. For more help on commonly confused words, check out these helpful worksheets and tips.