Spreading information that isn’t true about someone is a form of defamation. But the way that the information spreads can make it either slanderous or libelous. Keep reading to learn the difference between slander and libel – and how the consequences of both can be costly. 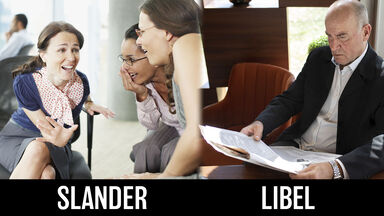 difference between slander and libel
Advertisement

The Main Difference Between Slander and Libel

False statements that cause damage to a person’s reputation are covered under defamation law. These statements are divided into two categories: slander and libel. Knowing whether someone is guilty of slander or libel can help you build your case.

The legal difference between libel and slander is:

Both words can also be used as verbs when talking about the action of defaming someone. When describing actions as a type of defamation, you can use the adjectives slanderous and libelous.

Slander comes from the French word esclandre, which means scandal in English. To slander someone is to put them into a state of dishonor – a scandal.

Slander is different from everyday gossip. People who spread gossip may or may not know if the information is true. They also don’t spread gossip with the intention of hurting someone or damaging their reputation, which would make it slander. Here are some examples of slander and their consequences:

Any of these cases might have legal consequences depending on how a court saw each side. For more information, check out an article that includes famous and historical examples of slander.

Unlike slander, libel does not come from a word that indicates dishonor. Its roots are in the Latin word libellus, which means “pertaining to the written word.” In today’s world, posting untrue statements on social media is technically considered libelous, as they are publicly posted.

Some scenarios involving libel include:

Even though both charges are significant, libel has historically been seen as more serious than slander because it’s harder to accomplish and easier to prove. However, the details of legal consequences depend on the situation and the opinion of the court.

Someone who makes slanderous or libelous statements about another person may be sued for damages in a lawsuit or even go to jail. They are especially open to legal ramifications if the justice system finds they made the statement with the malicious intent to cause harm to someone’s reputation.

Brush Up On Legal Definitions

Slander and libel are important to know as types of defamation. If you’ve got more questions about legal terms and abbreviations, check out a resource that includes a lengthy list of relevant legal definitions.