Upmost vs. Utmost: Are You Using Them Wrong?

You’re pretty sure the phrase is utmost importance, not upmost importance. But what’s an “ut” — and doesn’t upmost mean “highest,” anyway? There’s a good (albeit subtle) reason why you would choose upmost or utmost, and once you know it, you’ll elevate your writing to the utmost quality. 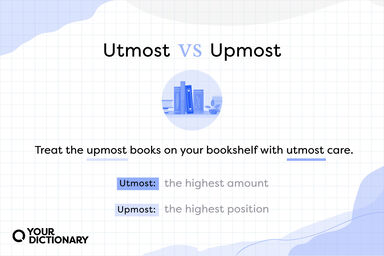 Bookshelf With Upmost vs Utmost example and definition
Advertisement

Focus on ‘Most’ in ‘Utmost’

Utmost doesn’t sound like a real word, but it is. The adjective comes from the Old English ūtmost, meaning “outermost,” and today it refers to the highest amount or degree. It’s more commonly used than upmost, also saying “upmost importance” is still a common usage error. When you use utmost, you’re saying “the most” (as in “the most important” or “the most concerning.”)

You’ll most likely see utmost as an adjective modifying abstract nouns, which describe ideas or non-physical concepts, when discussing the highest degree. For example:

Utmost’s near-homophone, upmost, has a similar meaning: “the highest position.” But upmost is synonymous with uppermost, and refers for something that’s physically higher than everything else. When you use upmost, you’re saying “the highest up” (as in “Your hat is the upmost item on your body” or “The cat is sleeping on the upmost shelf in the living room”).

Typically, the adjective upmost modifies concrete nouns — items that you can access with the five senses. For example:

Occasionally, you may see upmost describing abstract nouns when referring to the highest ranked position. For example:

You Can Use Both At the Same Time

Do utmost and upmost still seem too similar? Try using them in the same sentence to clarify their differences:

Can You Use ‘Uppermost’ Instead?

When all else fails and you’re stuck between utmost and upmost, try replacing the word with uppermost. Does it work, or does it sound awkward? If uppermost works, then the word you want is upmost. If it hits your ear (or eye) wrong, then you’re probably looking for utmost.