Difference in Meaning Between Verses vs. Versus

“Verses” and “versus” are examples of homophones. They sound the same the way most people say them, but have different spellings and different meanings. Explore the meaning of each word, when to use “verses” or “versus,” and how to remember the difference between them. 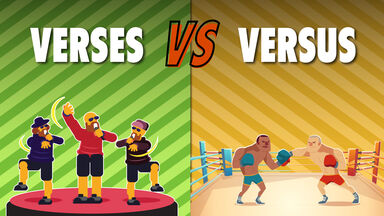 Verses vs Versus Example

The word “verses” is most often used as a noun, but it can also be a verb in informal language.

“Verse” as a Noun

“Verses” is the plural form of "verse," so it indicates more than one verse. The word “verses” is a noun and means:

The types of writing that typically include verses are:

A good trick for remembering when to use “verses” is that:

"Verses" ends with "ses," which sounds like "says," so it’s related to something that’s said in writing.

“Verse” as a Verb

On rare occasions, in formal settings, “verse” can be used as a verb that means:

To educate or teach about

A common slang version of “verse” uses the word as a verb that means:

To play against (an opponent) in a competition

You really only see it used this way by kids and teens, usually in the context of a game.

Example sentences can help you see how to use “verses” and better understand how it’s different from “versus.”

“Versus” is always a preposition, which links things together in a sentence. It is defined as:

In contrast to or opposing

Remember, “versus” links two or more contrasting or opposing things, like two teams. A good trick for remembering this meaning is that:

“Versus” is always used between two words that are opposing each other, so you won’t find it at the beginning or end of a sentence.

Abbreviations of “Verses” and “Versus”

It’s Verses Vs. Versus

Improve your grammar and clean up your vocabulary by learning the proper ways to use commonly misused words. Now that you’ve got a handle on “verses” and “versus,” try writing your own sentence examples.