Differences Between King, Emperor and Other Ruler Titles 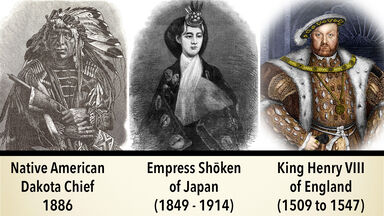 What Is a Ruler?

A ruler is simply defined as “one who governs.” Different regions, time periods, and types of governments use different ruler titles to describe the people who hold the power. Ruler is a generic term used to describe the person who controls the government in a geographical area.

A chart comparing and contrasting ruler titles can help you see the main differences between each of these terms.

What Is a Chief?

A chief is defined as “the leader of a group,” can be male or female, and represents the highest rank or office in the group. A female who holds this position can also be called a chieftainess or chieftess.

What Is an Emperor?

An emperor is defined as a male “supreme ruler of an empire.” The female term for this type of ruler is empress. An emperor’s territory is typically larger than a king’s or many other rulers. Explore a few emperor examples with a list of Roman emperors.

What Is a King?

A king is defined as “male monarch who rules a kingdom or the person who is considered most important [in that kingdom].” A king’s son is called a prince. The female equivalent of a king is a Queen.

What Is a Pharaoh?

A pharaoh is defined as “the king of ancient Egypt.” A pharaoh was a political and religious leader who could be male or female.

What Is a President?

A president is defined as “the highest elected or appointed officer or position within an organization or society.” A president is usually only a political leader, but can be a man or a woman.

What Is a Sultan?

A sultan is defined as “a Muslim ruler.” Originally, a sultan was a spiritual authority, but the title was later used for political authority. Sultana is the female form of sultan.

What Is a Tsar or Czar?

Understanding ruler titles is important when you’re learning about global history. When you know the subtle differences in things like the type of power a certain ruler had, you can better understand their actions. Continue learning about rulers by reading about different types of governments like democracies or totalitarian states.