Different Than vs. Different From: Is There Really a Difference? 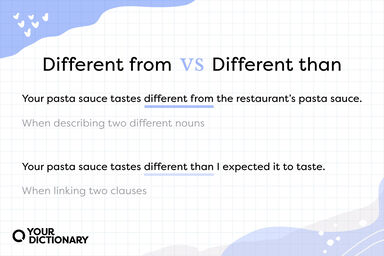 Different From vs Different Than examples and definitions
Advertisement

Use ‘Different From’ When Describing Nouns

In American English, the adjective phrase different from is the preferred way to differentiate between two nouns. It’s more popular and more widely accepted than different than. While different from typically follows forms of the verb “to be,” it can follow any other linking verb, such as “to taste” or “to seem.” For example:

Notice that in each sentence, from is followed by a noun. One noun isn’t necessarily better or worse than the other — they’re just different from each other.

Tip: See If ‘Differs From’ Works

Do the above examples seem odd to you? If so, you may be used to using different than. But there’s a surefire way to see if different from is the correct choice: Replace it with the verb phrase differs from. For example:

When differs from successfully replaces different from, use from. After all, you’d never say differs than — and there’s a good reason.

Use ‘Different Than’ When Introducing a Clause

The word than has two functions: a preposition (when following comparative adjectives such as taller, smarter or more interesting) and a conjunction. The adjective different doesn’t compare two things; it only describes them as “not the same.” That’s why different than isn’t the preferable choice in formal writing: than is for comparing, and different isn’t.

However, you would use different than when introducing a dependent clause, because now you’re using it as a conjunction to link two ideas. For example:

Watch out for situations like these in which the preferred different from is actually incorrect. “High school will be different from you think it will be” sounds awkward because from isn’t a conjunction, and it can’t combine two clauses in this way.

Tip: Noun Clauses Use ‘Different From’

Now that you’ve mastered the concept, here’s one final curveball: If you turn a dependent clause into a noun clause, you go back to different from (because now you need a preposition again). You can create a noun clause by adding a relative pronoun, such as what or that, or another noun to the beginning of the clause. For example:

This usage of different from isn’t very common. However, it’s important to know in those moments when different from and different than seem interchangeable, because they’re not.

What About ‘Different To?’

When in Doubt, Go With ‘Different From’

Unless you really want to pick apart your sentences to decide whether than is functioning as a preposition or conjunction, go with different from. It will satisfy most editors, readers and style guides, so you can’t go wrong. And if it still doesn’t sound right, you can always reword the sentence to avoid the phrase altogether.