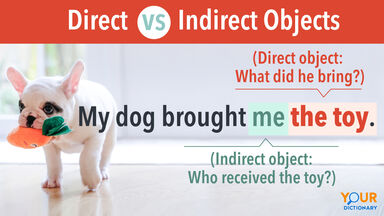 The Main Difference Between Direct and Indirect Objects

When you read a longer sentence, finding the direct and indirect objects may seem tricky. But it's easy once you know the questions each part of a sentence answers.

You can easily find a direct object by finding the verb in a sentence. Direct objects receive the action in the sentence and answer the question "Who?" or "What?" If the direct object is a pronoun, it must be an object pronoun.

Some grammarians believe that if the indirect object follows a preposition, it's automatically the object of a preposition. However, if you can move the noun just after the verb and the sentence still makes sense (as in the examples above), it's an indirect object.

Examples of Direct and Indirect Objects in a Sentence